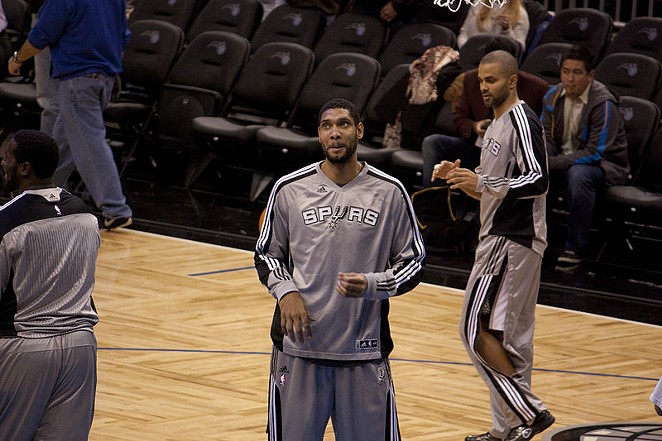 The lawsuit Tim Duncan brought against the real estate company Keller Williams in July has come to a close.

Keller Williams spokeswoman Sarah Marshall said she couldn't disclose settlement terms, but said Robert Elder, who doctored an image of Duncan to promote his business, has resigned. "The agent has personally apologized for his error in judgement to Mr. Duncan. He has resigned from our firm and is working with another brokerage in San Antonio," Marshall said. "We also take responsibility for this unfortunate misuse of Mr. Duncan’s image."

Shortly after Duncan announced he wouldn't return to the Spurs for another season this July, Elder used a photo of Duncan taken by San Antonio photographer Sarah Brooke Lyons for her "1005 Faces" project, which features locals holding signs expressing personal thoughts. Duncan's sign was quintessential Duncan: "Good. Better. Best. Never let it rest until your good is better and your better is your best!" Lyons had posted the previously unpublished photo to her Facebook account after Duncan announced his retirement.

According to the lawsuit, Elder, and employee in his office Stefanie Graham and two unknown individuals then altered that photo to promote Elder's real estate business by removing the original text and replacing it with the logo for Elder's business and a website address. Here's what the post, which has been taken down, allegedly said: "Wow! Just Wow! TD took the time to give us some love! Thanks Tim! We love you too man!"

"This was a very unfortunate situation and no disrespect or harm was intended by the agent’s actions," Marshall said. "In fact, the agent is a huge fan of Mr. Duncan."