Logan Takes the 'Wolverine' to a Darker Place 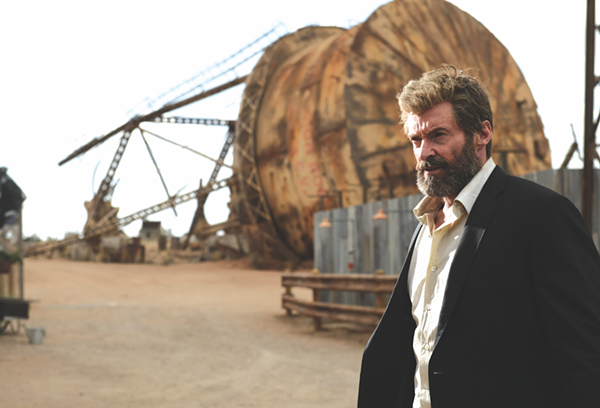 If there was any reason to suspect that co-writer/director James Mangold was going to deliver just another adventure for the Wolverine (Hugh Jackman) in Logan, he takes approximately two minutes to dispatch such notions. Gone are the trademark mutton-chop sideburns, replaced by a full (and graying) beard. The healing powers that have kept him alive for more than 150 years are fading, leaving him limping, coughing and self-medicating through his days. As for the much-publicized decision to make this an R-rated film — well, the first word out of Logan’s mouth is “Fuck,” shortly before he skewers and dismembers a bunch of guys trying to jack the rims of the limo he drives as a chauffeur around El Paso, Texas.

Stripping the claw-wielding mutant down to his brutal essence — a lonely warrior who never seems to have a shot at finding peace — makes for a fascinating change of pace for a character Jackman has already played in eight previous films. Mangold bypasses many of the trappings of the past decade’s superhero blockbusters, finding something that’s more mournful, and more packed with a violent sense of consequence, than other entries in this franchise. Yet that new direction also comes with its own set of unique pitfalls.

None of that is the fault of the terrific setup, which finds Logan and the albino Caliban (Stephen Merchant) among the few surviving mutants in their world. In an abandoned building south of the Mexican border, they alternate serving as caretaker for Charles Xavier (Patrick Stewart), whose mental powers are now a threat as a degenerative illness results in periodic seizures that threaten everyone around him. But their attempt to stay under the radar is thwarted by the appearance of a mute, nearly feral young girl named Laura (Dafne Keen) and the robot-handed government operative (Boyd Holbrook) determined to retrieve her.

The parental dynamic between Logan and Laura drives much of the narrative in Logan, as the veteran killer accustomed to isolation poses as part of a makeshift family when forced to hit the road with Charles and Laura and seek out a mutant sanctuary rumored to exist in Canada. Jackman has inhabited this character for more than 15 years, and he digs deep to gather all the loss we’ve seen him endure in the other films (along with other revelations that trickle out over the course of this one). If this is indeed Jackman’s farewell to the Wolverine, as he has indicated, he goes out with a renewed vitality, and a recognition of how to fashion Logan’s journey as a parallel of the scenes from Shane that are pointedly included here.

Of course, much of Logan’s distinctive sensibility comes as a result of its R-rating, which likely was only made possible thanks to the success of the similarly brutal and foul-mouthed Deadpool. Mangold certainly doesn’t waste his opportunity to make an adults-only Wolverine story, as the severed body parts and fountains of CGI blood accumulate at an impressive rate. Yet while Logan isn’t nearly as gleeful as Deadpool in flaunting its license to kill and drop F-bombs, the action sequences begin to take on a numbing sameness — and that’s even after Laura is shown to be nearly as dangerous an adversary as Logan himself. Even a grownup’s idea of a comic-book movie can’t entirely shed the expectation that the fights will get bigger and bloodier right up to the climactic showdowns.

It’s hard to complain about the ambition Mangold shows in Logan, considering how rare it is to find such an approach to these carefully protected intellectual properties. At times the narrative seems on the verge of getting even stranger and wilder, including a subplot involving an agribusiness conspiracy that feels under-developed and tossed off. But Mangold is impressively dedicated to making the most of his character beats, especially in the messy but genuine relationship between Logan and Charles that benefits from the long cinematic history shared by Jackman and Stewart (whose performance is by turns sad and unexpectedly frisky). Perhaps it’s impossible to completely shed the tropes of the comic-book movie, but Logan at least earns its emotional moments by committing to a tale of the damaged man inside the Wolverine.