London Sub & Pub Ain’t British, but Sure Feels Like Home 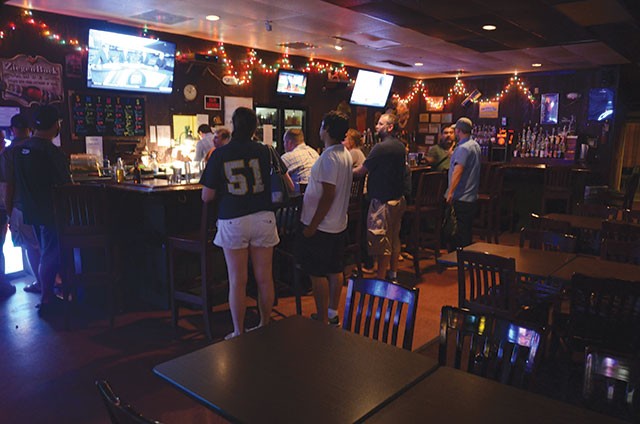 Let’s get this out of the way: London Sub & Pub is a bit of an eyesore. Most, if not all, of the bar’s neon signage has flickered off with time, and if you’re not entirely sure where you’re going, you might miss it and end up at the neighboring H-E-B. But you’re not there for any added bells and whistles, like fancy signage or Burberry-inspired aesthetics.

To clarify, there’s not a whole lot of London at the London Sub & Pub. And if you were hoping for snacks, the vending machine in the corner of the bar is the closest thing to pub fare. Hungry patrons are welcome to bring in outside food (but beware, the nearby House of Joy Chinese Restaurant closes at 9 p.m. in case you were jonesin’ for some eggrolls).

The London theme really comes to a halt the minute you step inside the doors. The royal family has no place here, even in kitsch form. As one of my visit companions put it, “signs for Boddington’s, Guinness and New Castle does not make it a pub.” Instead, pool tables, three electronic dartboards, electronic bar games and plenty of seating take over the space.

But before you get your knickers in a bunch, London Sub & Pub does make up for its lack of Anglophilia with Premier League soccer on its few screens. The patio won’t wow anyone with its digs, but if you want to smoke a few ciggies and enjoy a nice breeze while drinking your beer of choice, it’s an option.

Where other bars impress with meticulously thought-out floor plans, over-wrought décor and massive beer lists, London S&P is the ideal spot to avoid any sort of pretense. My quippy bar friend must once again be quoted verbatim, “There’s not a vest or mustache in sight!” Right ho, Jeeves.

We popped in on a Wednesday evening, which happened to be raffle night. Bartender Lorne handed each of us half a ticket while describing the drawings held at 30-minute intervals in which we could make out like bandits with free glassware, beer of choice or the $25 tab grand prize at midnight. Lady Luck wasn’t on my side that night, but my bud did win the 11 p.m. drawing for a shot of his choice.

London Sub & Pub straddles that fine line of flat-out dive and simple watering hole. The bar is far from a meat market, thankfully, and plays host to chill groups of friends, couples on dates and dudes just out for a beer (of which there are 24 on tap, both big names and local craft brews). With a dozen years in, the bar has its fair share of wear and tear, but isn’t dingy or unclean.

The making of an excellent dive, at least in my opinion, is in its attentive bartenders and solid jukebox variety (think Bar America as one example), and London S&P did not disappoint. I can’t remember the last time I listened to U2’s “Sweetest Thing,” Spoon’s “I Turn My Camera On” or Iggy Azalea’s “Fancy” in the same mix.

As for friendly service, as we chowed down on salty garlic Parmesan wings via Wing Stop (there’s one about 10 feet away that stays open until midnight), the bar crowd swelled to several dozen. Even with the added lot, bartender Lorne made sure our pints never ran dry, and treated our pack like well-acquainted regulars. If you’re dying to feel at home while at a neighborhood bar, in suburbia no less, you could do far worse than visiting London S&P.