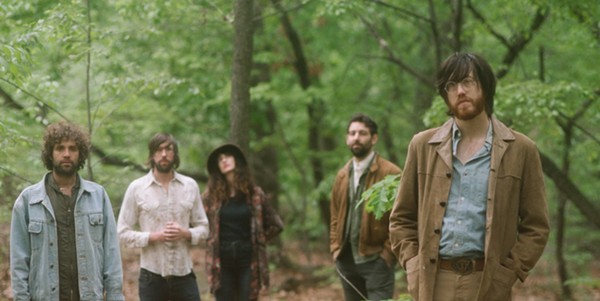 For the second annual Lone Star Beer Texas Heritage Festival,
said National Beer of Texas and Feeding Texas (fka Texas Food Bank Network)
once again join forces to bring us a sweet lineup of music. Proceeds will
benefit Feeding Texas' mission to combat hunger in the lone star state through
raising awareness and providing food relief, with the goal being ultimate food
security for all. But, with tickets priced at just ten bucks a pop and a
tremendous bill of performers, you don't exactly have to be a full-fledged
philanthropist to get behind this cause. This year's performers include two
acts with highly-anticipated albums on the way, Okkervil River and Shovels
& Rope, one act with a recently released solo foray, Matthew Logan Vasquez
of Delta Spirit, and one of Saytown's most beloved homegrown originals, Girl in a Coma. Let's take a quick look at why you'll want to catch all four acts.

Okkervil River
Okkervil River's eighth studio album Away, the follow up to 2013's somewhat underwhelming effort The Silver Gymnasium, is due out on September 9. The album's lead single, the existentially pained yet beautiful and hopeful "Okkervil River RIP" has, on account of its loaded title, caused some concern among fans, worried singer-songwriter Will Sheff might be hanging up the moniker under which he's released a constant barrage ofhyper-literate, and unabashedly vulnerable, indie folk-rock since the early 2000s. In speaking with the San Antonio Current last week, however, Sheff indicated that there's no need to worry. "If you think Okkervil River is over, you're right," Sheff cryptically explained, "But it has only died to be reborn."

As Sheff worked on Away, of which fans should get a solid preview at Sunday's show, he was seeking respite from a number of personal and professional difficulties (including the death of his beloved grandfather) and wasn't thinking of it as an Okkervil River album per se. It took a few years for Sheff, who is essentially synonymous with Okkervil River, as the act's only constant member, to realize that "This is an Okkervil River album and it needs to be released." At the encouragement of friends, and with the help a newly recruited incarnation of the band, Sheff finished and will now release the album. According to Sheff, Away – which, upon my first few listens, sounds like it may be the best thing he’s ever done – is the result of his search for “a new path in the ashes of what came before” and a concerted effort to make something “universal, inspirational, even hopeful.” Sheff is excited to tour behind the album and to play older songs with the fresh perspective of a new band.

Shovels & Rope
Husband and wife duo Michael Trent and Cary Ann Hearst, known as Shovels & Rope (a nod to the duo’s countrified, blue-collar, soul-rock sound), are putting in work. One of the brightest rising stars on the national Americana scene, Shovels & Rope is set to release Tiny Seeds, itsfifth album since 2008, in October. We can only hope the duo will give us a taste of what’s to come in its set here. However, new music or not, Shovels & Rope is, probably through a workhorse mentality that’s kept them on the road almost constantly, one of those live acts that simply cannot be missed. On stage, the duo’s clever, fiery, and genre-straddling songs take on levels of emotion and layers of soulful nuance that makes them impossible to deny.

Matthew Logan Vasquez
A veteran of the indie-rock side of Americana soul, via his longtime band Delta Spirit, Matthew Logan Vasquez comes to town in the midst of a massive tour supporting his first solo LP Solicitor Returns. The album is the type of dusty, Crazy Horse-worshipping, psych-rock affair, replete with chunky riffs and even a piano-based closer, that you might expect from an Austin boy come back home on hiatus from his main band.

Girl in a Coma
We’ve spilled a great deal of ink in these pages reminding folks that Nina Diaz, Jenn Alva and Phanie Diaz’ punk-rock trio Girl in a Coma ain’t nothing to fuck with. It is, however, worth mentioning that at this point, catching the trill trio in action, let alone in San Antone, is something of a rarity. Nina has busied herself with her excellent solo work of late, while Jenn and Phanie continue making waves with their bruising punk band Fea. Ergo, you’ll want to make it a point to catch the Girl in a Coma gals, back in action for a good cause.