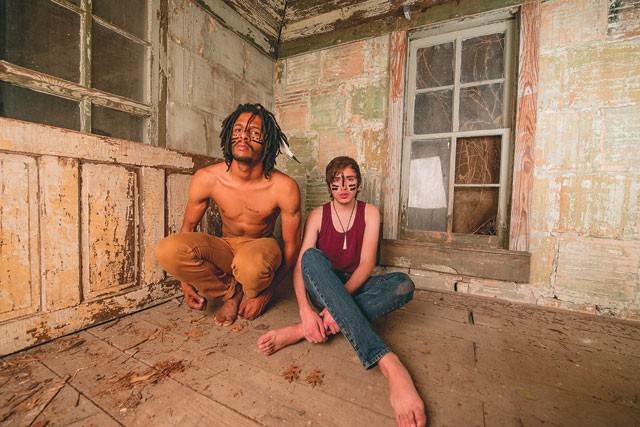 San Antonio's Lonely Horse is a two-piece tribe comprised of Nick Long and Travis Hild. They make dark folk-rock which crackles with bluesy riffs. Dense and intense, Lonely Horse's songs are emotionally explosive and spiritually charged works of art that will leave your little hairs standing on end and your mind wondering how two dudes can reach such heights of sonic power and immediacy.

Seeing the band play live, you understand the extent to which this is Long's personal passion project (the name of the band itself is Long's Native American name). His voice — probably the outfit's strongest instrument — is impressively expressive and can range in flavor from a stomach-turning dejection to painful anger to a tender understanding of himself and others. I get the sense that Long, who also pens all the songs and plays guitar, creates and plays music as an urgent need rather than simply a hobby or career choice. Meanwhile, there's an organic connection between Long and Hild (drums), whose musical intuition, ability to make quick adjustments, and imagination allow the two to improvise large portions of their songs live and to create spaces where new creations are born inside of older ones. Seeing them live is an arresting experience.

Long spoke with the Current days before the Hi-Tones' March 22 release party for My Desert Son, the first Lonely Horse EP.

On the band's odyssey:
"In the beginning, most of the inspiration came from old family stories and my Blackfoot/Siksika Native American heritage. I wanted to make like indie rock music for Indians [laughs] or something like that. But I think both my cultures ended up blended well with each other, music-wise. We've been jamming for about two years now and it's taken us this far to find out how to exactly deliver our music in a way that people will turn and listen. We're a two piece now because we choose to be. I think it was meant to be that way."

On 'My Desert Son':
"It's a whole lot of me. Most, if not all, the songs on this EP are stories of my failed marriage and divorce, realizations that not everything works the way you want it too [Long's son now lives with his mother in Virginia]. Fuckin' tore me to pieces. I was a river, he was a tree, and she was my sun. Now that's all a desert. I hope San Antonio feels the music in a spiritual way. I think we captured the emotions and intensities that we needed."

On their plans for the release party:
"We want to try and getthe crowd's attention through all the booze and have a real moment, a pure moment, so I'd say we might try and make it more personal — break it all down and build everyone up again."