Look, Another Film In Which Al Pacino Plays ... Al Pacino 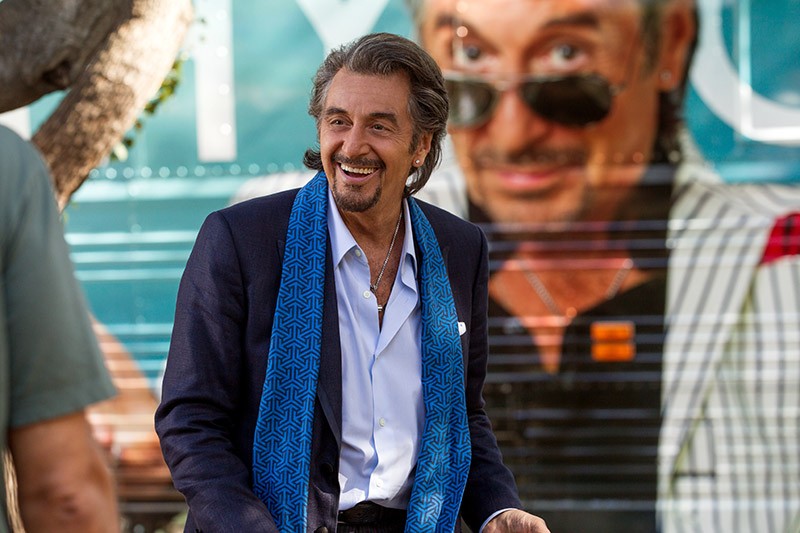 It feels as though Al Pacino has been "doing Al Pacino" in movies ever since he won the Oscar for 1992's Scent of a Woman, where he played the blind, brash, brazenly offensive Lieutenant Colonel Frank Slade. It was a terrible film then and it's almost hilariously unwatchable today, yet people were inexplicably charmed by Pacino's one-note bellowing, and it raised him to a new level of popularity.

Despite the fact that one-note screaming lessons came to dominate his work, Pacino's 1990s post-Scent performances in films like Heat, Donnie Brasco and The Insider are a relatively diverse lot. But like his generational equal Robert De Niro, he succumbed to a highly lucrative life of scenery-munching self-parody. It was kind of fun at first, like a reclusive rock star playing a concert full of his greatest hits, but it's grown progressively depressing, like that same rock star playing that same catalog of greatest hits a quarter century later.

In writer-director Dan Fogelman's scattershot Danny Collins, there is a brief sensation that Pacino will engage in some soul-searching self-commentary on the subject (sorry, Jack and Jill does not count). He plays the title character, a sensitive 1970s folk singer turned creatively bankrupt modern-day pop buffoon, a man who gets more washed up the more successful he becomes. As the film opens, Danny is drowning in the clichés of boomer rock stardom — cocaine, booze, a ridiculously young fiancée, fake tans, wigs and girdles — and his life has become a non-stop greatest hits tour played for an audience of Twizzler-eating seniors.

A birthday present from his best friend and tour manager Frank (Christopher Plummer, good in even the most incredulous roles) pulls Danny out of his downward spiral of runaway success. It's a framed 1971 letter written to Danny by John Lennon, stolen and lost for decades, in which Lennon responded to a magazine interview where Danny talked about his fear of commercial success, especially the negative effect it might have on his music.

In the letter, Lennon advises Danny that the key is to "stay true to yourself," which Danny interprets as a call to ditch the mansion and the fiancée to hole up at a New Jersey Hilton, where he intends to reunite with his estranged family and write the One Perfect Song that will fix everything. As soon as it becomes clear that the film is really about the megastar Danny bantering with star-struck hicks and learning how to love again, it sinks like a stone, and we're right back to Pacino "doing Pacino".

Pacino's shameless preening results in some enjoyably loose-limbed moments, the best of which he shares with Annette Bening (who plays the hotel manager), but the family scenes are a drag. A teeming mass of quirks, tics and inexplicable behavior, Danny's family could have been assembled by a Sundance Film Festival selection committee. There is the dewy-eyed but inwardly tough pregnant mother (Jennifer Garner), the resentful but sensitive father hiding a Big Secret (Bobby Cannavale) and an adorably sass-mouthed moppet named Hope. They come straight out of Juno's Buyers Club of Little Miss Station Agents, and the contrivances stack up whenever they're around.

The actors all do fine work, but they're swimming against the tide of Fogelman's script, which features some sharp dialogue and interesting ideas but never assembles its pieces into a credible whole. Fogelman absolves Danny of any responsibility for the familial estrangement very early, cutting off the film's limbs in order to make the protagonist more ostensibly likeable. Robbed of any real character stakes, Pacino is left to ham it up for the hotel staff, goof around with his granddaughter and wait for the son to get over his shit.

Although the film claims to be "based on a true story a little bit," the Lennon letter is the only sliver of a semi-fact in Danny Collins. A more accurate description would be "based on an excuse to cram the film full of John Lennon's greatest hits (while also slut-shaming the entire greatest hits concept)." Lennon's music guides and comments on the story, in a fairly predictable but effective fashion — "Whatever Gets You through the Night" plays as Danny marinates in liquor and drugs, and we hear "Beautiful Boy" after one of Danny's failed attempts to reconcile with his son.

Fogelman gets a lot of emotional mileage out of his song licensing budget, but the film's use of Lennon as a talisman of family values and artistic integrity feels false and ignores many of the facts of Lennon's life and career. Yet that level of cognitive dissonance is strangely fitting for Danny Collins, a film that builds its star an ideal platform for game-changing introspection – then never allows him to take the stage.