Los Frogs Bar and Grill Hops Along with Mexican Standards 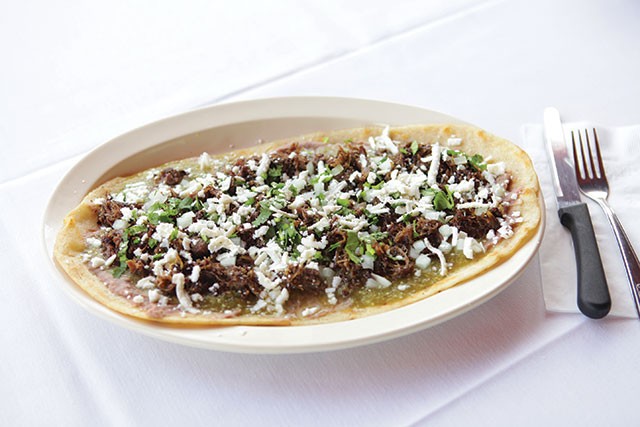 No, you’re not in a swamp, but you will find plenty of amphibians at this eatery. Once the late Web House Café and Bar, Los Frogs Mexican Bar & Grill has made strides in giving the location new life with a fresh paint job and a lime green mascot. Though there’s no explicit relation to Mexico’s Señor Frog’s, the vibe is vaguely similar. If Señor Frog’s is the established older brother, San Antonio’s Los Frogs is a ragtag younger sibling. The décor is redundant and kitschy, as if the owners asked: How many metal frogs can I fit into one building? The answer: many.

Yet, the addition of Los Frogs at summer’s end was a bit ho-hum. There are several other similar joints nearby (Taqueria Chapala Jalisco, El Milagrito, El Regio Café and La Gloria are all within a mile), so it was hard to peg whether this neighborhood bar and grill with a penchant for ranas would make it through the winter.

My first visit to converted space was for breakfast. The menu is small, no doubt, but let’s be honest, I was there for the breakfast tacos. Not usually a fan of chorizo and egg (too messy), I decided to give Los Frogs’ version a try and this little froggy didn’t disappoint. The egg was fluffy enough to encapsulate every bit of chorizo—no extra napkins needed. The barbacoa, served with fresh verduras (onions and cilantro) did require a bit more finesse. While the flavor was spot on, the grease leaking from my tortilla was enough to ruin several sweaters. The country ham and egg was standard, though also enveloped by the same fluffy eggs as the chorizo. Any one taco is more than enough to get you through the morning.

Much like Los Frogs’ more upscale neighbor at the Pearl, the restaurant specializes in a bit of street food while also throwing in Tex-Mex fare. The mini sopes were A) not so mini and B) loaded with bright red chorizo, crema and a healthy sprinkling of queso fresco. The masa, fried just so, was satisfying and perfectly seasoned. An order of “mini froggies” or mini taquitos de bistek was once again suitable, but not mindblowing; if anything, the taquitos needed a good salting. Kermit would have approved of the bright green tomatillo salsa with just a touch of avocado, which helped give the taquitos a kick. My dining partner’s huarache was a highlight: almost as wide and long as the plate it was served on, the slightly-thicker-than-average tortilla was topped with a choice of two meats, a layer of refried beans, the aforementioned verduras and the green salsa. Available at $5.50 without meat, and $8.95 with, the huarache is a must-try, if only because you can top it with the lemon-y pork costillas and barbacoa for the best of both worlds. Of the caldos offered, the fideo ($5.50-$6.50) was thick and savory with a strong dose of tomatoes and cumin.

Another lunchtime hit came in the way of the albondigas en chipotle paired with quality Spanish rice and a serving of refried beans. Intrigued by the mention of meatballs, I decided to give the dish a shot. While not the most aesthetically appealing dish by any means, the albondigas were pleasantly seasoned with the signature smoky spiciness from the chipotles coming in as more of an afterthought.

While it might not replace a go-to breakfast taco spot, Los Frogs does put up a good lunch game. One thing that might get patrons to the restaurant besides its solid huarache offering could be its ample patio where the cervezas are guaranteed ice cold (Note: Don’t hang your hopes on the margs. The only one offered here is a Mike’s Classic Margarita over ice). Once temperatures stop dipping into the 20s, I might have to find out what exactly a house chamochela (yes, that’s a michelada/chamoy mash-up) tastes like.