Lost in Bonkers: The Vex revives Kesey’s vision of mental health as tyranny 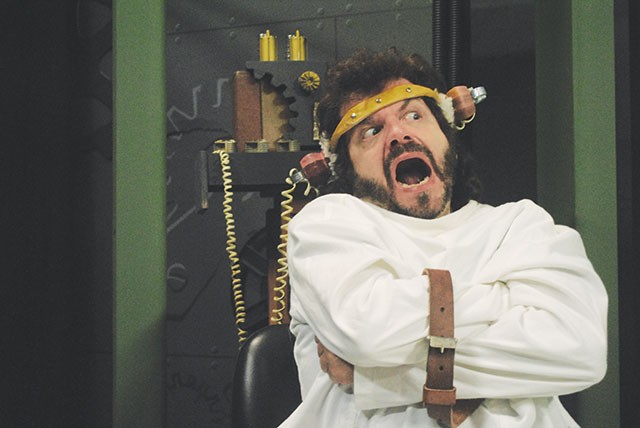 When Ken Kesey published his first novel, in 1962, madness was the rage. A disordered mind marked brave defiance of a regimented society. In The Divided Self (1960), R.D. Laing had railed against the categories of mental health by which his own profession, psychiatry, coerced and controlled. In Catch-22 (1961), Joseph Heller captured the lunacy of war in which the only way to gain release from dangerous bombing missions was to claim insanity, though anyone who requested release from dangerous bombing missions thereby proved he was sane. The 1966 French film King of Hearts became a cult hit by depicting the inmates of an insane asylum more lucid than the people waging war outside. The most clearheaded magazine of the era called itself Mad.

Kirk Douglas bought the rights to One Flew Over the Cuckoo’s Nest and, in 1963, starred, along with Gene Wilder, in a theatrical adaptation by Dale Wasserman that lasted six months on Broadway. In 1975, Douglas’s son Michael produced a film version that ended up winning Academy Awards for best picture, director Milos Forman, actor Jack Nicholson, actress Louise Fletcher, and screenwriters Laurence Hauben and Bo Goldman. The Wasserman adaptation, currently being revived by director Dylan Brainard at the Sheldon Vexler Theatre, comes during a more cynical time, when audacious rebels more often turn out to be psychopathic demagogues.

From the moment he bursts into the psychiatric ward that is the setting for the entire play, Ken Frazier’s Randle Patrick McMurphy is determined to take over as what he calls “the bull goose loony.” His mission is easily accomplished, since the half-dozen patients sharing the ward with him are a docile bunch, cowed into submission by Tami Kai’s autocratic Nurse Ratched. All she has to do to put Scott Leibowitz’s Harding, the inmates’ elected representative, in his place is remind him of his inadequacies with his voluptuous wife. In one way or another, all of the men, including Rick Lukens’ doddering Dr. Spivey, are impotent, incapable of asserting themselves with a woman. Kailyr Frazier’s stammering, virginal Billy lives in mortal fear of his mother’s judgments. The oversexed McMurphy sizes up Nurse Ratched, whom he calls “Rat Shit,” as “a ball-cutter from way back.” When he first encounters them, the newcomer finds a limp-dick group of men who lack cojones.

A shrewd opportunist, McMurphy, who had been sentenced to a penal work farm for assault and battery, figured that feigning psychosis would liberate him from hard labor. However, the scammer is scammed; he has traded a five-month sentence for life in a loony bin under the absolute control of a medical despot with the authority to keep him there indefinitely. Enforcing her regime are a cringing staff and the weapons of electroshock and lobotomy. Nevertheless, McMurphy not only resists, but also exhorts his fellow patients to join him. “Ain’t you got any guts?” he exclaims. Most of the play is a war of wits between McMurphy and Ratched to gain the loyalty of the other inmates.

The actors move robotically in a dour industrial set, designed by Konnor Frazier, that reinforces Chief Bromden’s paranoid belief in “The Combine,” a sinister human machine that governs everything. Kesey’s novel is narrated by Bromden, a hulking half-Indian of the Pacific Northwest who, diagnosed with catatonia, is presumed deaf and mute. He is ultimately the one who flies over the cuckoo’s nest, after revealing that, fully capable of hearing and speaking, he was simply biding his time in silence. The stage production intersperses awkward interludes in which Barry Goettl’s Bromden stands brooding while his recorded voiceover thoughts are played. In addition, disclosing the ruse of his sham catatonia earlier in the proceedings is also less effective.

“This is all a collaboration between Kafka and Mark Twain” is how Leibowitz’s Hardy, fond of Shakespearean intonations and Olympian pronouncements, summarizes what happens on stage. It is also a happy collaboration among talented actors, though it will not eclipse memories of the film version. Boisterous and ballsy, Frazier’s McMurphy speaks in a Southern-inflected bravado singsong that rubs away some nuance in his character. Kai portrays Ratched as more subdued and mellow, not quite the martinet that Fletcher plays on screen.

“This ward is a society in miniature,” declares Dr. Spivey, as if all the world’s a booby hatch. Aside from a guard’s pencil-thin LED flashlight that was not marketed until some years later, the production is faithful to its stated setting in the early 1970s. However, the didacticism in Kesey’s preaching against the extinction of Native Americans seems a bit clumsy today. “This place is a madhouse,” says Hardy, in one of many self-referential jokes spread throughout the play. One Flew Over the Cuckoo’s Nest is madcap fun, but also a sobering reminder that mental illness is its own prison, with or without an anal tyrant named Big Nurse.

One Flew Over the Cuckoo’s Nest