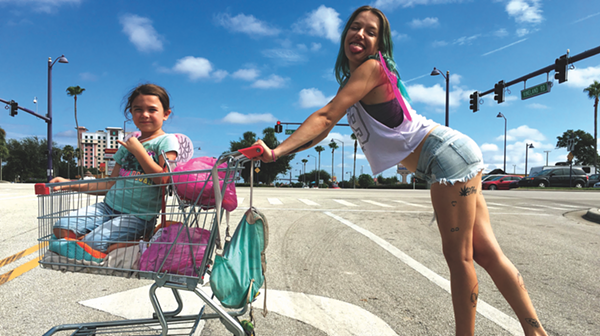 The walls of the Magic Castle Inn — the primary setting of Sean Baker’s The Florida Project — shine with a new coat of pastel-purple paint, desperately trying to evoke the happy playland of Walt Disney World just up the Orlando highway. The name might confuse someone into an online booking, thinking it’s actually a Disney hotel, but it’s a world of broken ice machines, bedbug infestations and semi-permanent residents who can barely make the weekly rent. But it’s still a place where kids can have a summer of adventure and fun — even if they’re almost completely unsupervised, and some of that “fun” involves burning down an abandoned condo.

The Florida Project is a messy movie full of messy people, and it would be easy to find many of them borderline irredeemable. The focus is on Moonee (Brooklynn Prince), a 6-year-old living with her unemployed single mother, Halley (Bria Vinaite), at the Magic Castle. Out of school for the summer, Moonee and her friend Scooty (Christopher Rivera) — who also lives with a single mom in the room just below hers — find a new playmate in Jancey (Valeria Cotto), who lives in the nearby, also-Disney-adjacent-named Futureland Inn. They spit on a car from the motel balcony. They scam tourists for change so they can buy ice cream. And yes, they set fire to a derelict building while using it as a playground.

Baker (Tangerine) doesn’t soft-pedal the near-feral nature of his young characters, nor does he make most of the adults surrounding them particularly sympathetic. Halley is a complete mess, surviving on the freebies provided by Scooty’s mom Ashley (Mela Murder) from her job at a diner, selling wholesale perfume for a profit at the more upscale hotels and turning to prostituting out of her room when other options run out. There’s no hard-luck back-story to explain why Halley is the way she is, and it’s a bold move by Baker to treat the character as deserving of compassion because she’s a human being, not because she was perhaps once a victim. That doesn’t necessarily make it easier to spend time with her, especially when she seems gleeful about getting away with ripping off a bunch of Disney admission “magic bands” from one of her johns.

The actual job of surrogate parenting is left to the Magic Castle’s manager, Bobby (Willem Dafoe), who deals with everything from fights on the property to a resident who won’t stop sunbathing topless by the pool. Dafoe brings a weary decency to the role, trying to do his job while still treating the struggling residents with respect. In one uncomfortably wonderful scene, he spots a stranger approaching a group of the resident kids, instantly senses a possible predator and swoops in to move the threat along on his way. Baker perhaps underlines a bit too obviously the way the Magic Castle becomes a makeshift family for Bobby — briefly introducing an adult son (Caleb Landry Jones) he hires for odd jobs as an excuse to spend time with him — but there’s a lovely humanity to a man who could remain at a professional distance from the people around him, but finds it impossible to do so.

The story mostly belongs to the children, though, and it’s here that Baker redeems whatever stumbles he makes with his adult characters. All of the young actors are fascinating to watch as they roam, ramble and raise hell, but Brooklynn Prince becomes a magnetic center. Moonee’s beyond-her-years behavior — flipping off passing helicopter tours, or twerking to music — isn’t meant to play as shocking in a “Harmony Korine goes to first grade” way, but instead as a demonstration of what we don’t see from Halley’s own history. She may be a loving mother, but she’s a terrible mother, and Moonee’s simply the next generation in a cycle that kills up-by-the-bootstraps mythology.

Another kind of mythology also lurks forever around the edges of The Florida Project, and that’s Disney World itself. Though close enough that the evening fireworks appear in the sky, it’s also practically another universe as far as these characters are concerned. Without wallowing in miserablism, Baker provides a reminder that there’s a certain kind of childhood innocence that just isn’t in the cards for many American kids. When the Magic Kingdom isn’t an option, the Magic Castle is all that’s left.