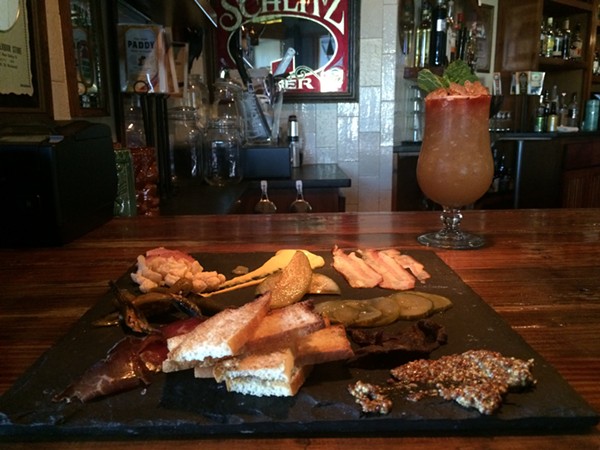 Unfortunately, since opening a year ago, the schemata seems to have run aground, proving that there is a reason few upscale Irish bars flourish. The bar has recently scaled back its Irish feel and morphed into a vaguer gastropub concept, offering entrees ranging from Thai chicken wings to lobster mac ‘n’ cheese, neither of which have much Irish provenance.

Still, the facelift may come as welcome news to many, as Bogside’s transition brings lower prices and less formality. And though in its décor and ambience the bar still clings to its old sophistication, the menu has finally let down its hair.

During happy hour, which stretches from 4-7 p.m. Tuesday through Friday (and all day Monday), patrons are dressed casually, enjoying discounted drinks and elegant food at a fire sale price. Drink specials include $1 off wells, draughts and domestics, as well as a medley of signature cocktails for $6. Stiff, redolent of citrus and poured tall, the Irish Old Fashioned with Jameson whiskey ($6) was one of the few vestiges of the bar’s patrimony, though far from an unwelcome one. If a lighter but no less potent mixed drink sounds better, go with the No Rum of Mine ($11), a house cocktail of El Dorado 12-year rum, mezcal, amaretto, allspice, and a house-made pear shrub; the drink teeters on tiki, but the mezcal keeps Copa Cabana at bay.

Where food is concerned, pizza may best be your best bet. The French Onyx ($17), an aromatic pie dotted with black pepper sausage, Gruyere, and fennel, is memorably sharp, with strong salty accents dulled pleasantly by the sour whispers of the yeasty dough. For a seasonal treat, roll your dice with the charcuterie board ($10).

Made with rotating proteins, mustards, vegetables and breads, creations such as lamb ham and apples pickled in red chile vinegar showcase the untapped potential of the kitchen. Unfortunately, happy hour discounts fail to extend to food, meaning few of Bogside’s offerings could be described as inexpensive. Still, the quality of ingredients and the professionalism of the staff justify the price, so as long as you’re not looking for an Irish bar, you’ll leave satisfied. 803 S. St. Mary's St., (210) 988-3093.