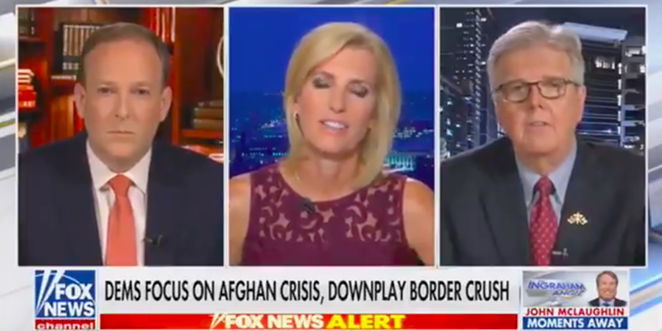 When asked by host Laura Ingraham to defend criticism leveled at Gov. Greg Abbott for mishandling the delta variant surge, Patrick instead deflected the blame to "African Americans who have haven't been vaccinated," labeling them as the "biggest group [of unvaccinated people] in most states."

"Most of the numbers are with the unvaccinated, and the Democrats like to blame the Republicans on that," Patrick said. "Well, the biggest group in most states are African Americans who have not been vaccinated. The last time I checked, over 90% of them vote for Democrats in their major cities and major counties. So, it's up to the Democrats to get — just as it's up to Republicans — to try to get as many people vaccinated."

Patrick went on to defend the GOP for not wanting to "force" anyone to get vaccinated, suggesting Democrats bore responsibility for low vaccination rates among Black residents.

"[Democrats] are doing nothing for the African American community that has a significant, high number of unvaccinated people," he told Ingraham.

Demographic data from Texas' own Health and Human Services department shows Patrick is wrong about his assertion. Black residents account for 16.4% of the state’s cases, behind Anglo and Latinx residents, which each account for roughly a third.

What's more, health data scientist Dr. Jorge A. Caballero pointed out in a Tweet that U.S. Census data shows that there are three times as many unvaccinated white Texans as there are unvaccinated Black Texans.

Per the Census Bureau, 50% of unvaccinated adults in Texas are White (non-Hispanic)

Oh yeah, and Dan Patrick is a racist. https://t.co/CoLmAM3G9d

“Making a statement that casts blame on a racial or ethnic minority for the spread of disease is a well-known racist trope that predates most of us,” Caballero, a former instructor at the Stanford University School of Medicine told the Washington Post about Patrick's claim. “People are already getting hurt by this virus, and it makes absolutely no sense for us to add insult to injury.”