It’s a Wednesday night, the final in-classroom meeting of UTSA’s Advanced New Media class before spring break, after which the eight students will install their group show in the Convention Center for this Saturday’s public Luminaria extravaganza. Monday’s class was held in a coffee shop, where the students worked out a logistical plan of attack; they delegated signange responsibilities, discussed wall space, projectors, and extension cords, and decided to spend the $200 group budget on books and videos to donate to the John Peace Library. In tonight’s class, each student will present a conceptual “Show and Tell”-type illustration of his or her project, itself no easy task: each student work incorporates a bewildering array of variables, including contemporary and art-historical influences, technological and material challenges, and a metric boatload of creative brainstorming. The theme assigned to the class by Leslie Raymond, associate professor of art and art history and the architect of UTSA’s New Media program (now in its fourth year), is influenced by our recent sea change in American politics; the hopeful and terrifying concept they’re tasked with is “utopian visions.”

And how the hell do they do this? For one thing, the term “New Media” for many conjures up something theoretical and nebulous, and contains a whiff of ivory-tower impenetrability. During the UTSA New Media program’s first Luminaria outing last year, Raymond later tells me, older attendees seemed intimidated, and often only ventured into the gallery after sending their kids in first — then, when the kids responded excitedly to the exhibition, dove in with open curiosity. Because New Media, it turns out, encompasses any and all genres and possibilities opened by modern technology: From digital music to comedic character performance; from straight-ahead videography, to animation; it includes on-site, ad-hoc architecture, and even online “hacktivism.” Really, we know more about it than we think. Any one of us who’s enjoyed a You Tube viral video or uploaded JPEGs of a family outing to MySpace has engaged in New Media. New Media thereby stands as both genre and revolution, at once deeply challenging, and profoundly democratic, accessible — like the open galleries of Luminaria — to everybody.

Raymond takes a few minutes pre show-and-tell to address the class, stepping up on what she only semi-jokingly calls her “pedagogical soapbox” to contextualize the role of the Luminaria “Utopian Visions” show in these students’ development, as well as the role of young artists in the larger world. This sounds like heavy stuff, and indeed, animating Raymond’s laid-back demeanor and colloquial speech is an urgent, no-bullshit sense of creative output as a form of engagement, even of civic duty. The class has been assigned readings, pro- and con-, regarding the Obama administration’s commitment to arts funding, particularly the additional $50 million allotted to the National Endowment for the Arts. Contemporary art as it relates to the culture at large is at a crossroads, Raymond emphasizes, and these young people occupy a creative and sociopolitical territory in flux.

“What is art for? This is a question we should all be thinking about. The whole late-20th Century discourse on contemporary art that’s gone on amongst artists, who’re looking inward towards themselves, and having a conversation only with each other, as opposed to reaching out to the world — `this` model is really being questioned right now,” she says. “In this moment of political change, I see `Luminaria` as an opportunity for you guys to take on some responsibility. Why do you want to be an artist? What do you want to do after school? … It’s really up to you guys, who are the younger generation, to figure out how to step out into the world in new ways, how to help regular people feel closer to art. If you really believe art is important, and you’re not just sitting up in your room jerking off about it, then take responsibility and do something.”

And with that, each student steps up to a classroom lectern tricked out with their prof’s web-enabled laptop and a projector, and delivers a mini-lecture augmented by deftly navigated video clips, carefully culled images, and diverse websites. Here, based on their presentations, proposals, conversations, and ongoing class blogs (which you can find and read at utsa-newmediastudio.net), is a glimpse into the process and influences of these UTSA New Media artists, and what they will share with San Antonio this Saturday.

James shared a clip by Australian artist Keith Loutit, who uses a complex technique of “tilt-shift” videography to warp panoramic overhead footage of Australian seaside landscape, crowds, and rescue vehicles into arrestingly miniaturized dioramas. James’s previous video work belies a deep sensitivity towards and fascination with the natural world, and his Luminaria project (tentatively tiled “Min-Ute-Ness”) will likewise manipulate scale and perspective in order to “re-frame the familiar” and open viewer’s eyes to the unexpected preciousness surrounding us.

Sheffield showed photographs by pioneering African-American imagemaker Gordon Parks, director of the film Shaft and creator of such iconic images as “American Gothic.” Inspired by Parks, by the hope inculcated by the election of Obama, and captivated by the chanting of televised nuns, Sheffield plans to project Obama speeches and clips of Catholic religious practice through a 1960s-era television, which she will set amid detritus representing a cultural past, such as chain-link fencing, and a wooden crate suggesting (even inviting) soapbox speechifying. The installation, entitled “Separation of Power,” addresses the possibility of change amid the interplay between art, government, and religion.

Burkey is deeply engaged with the notion of social, upbeat, viewer-friendly video, and she cites performance artist/writer/filmmaker Miranda July, co-founder with Harrell Fletcher of the art-by-the-public online juggernaut Learning to Love You More (learningtoloveyoumore.com), as an important influence. She screened a short video by July in which she gives a satiric interview about her book of short fiction, No One Belongs Here More Than You, which treats the physical object of the book as a personality. For her part, Burkey conceives her Luminaria project as a character-based video installation investigating the dearth of art education in public schools — a satiric “world without art” using humor and her social conscience, and drawing from her own experiences as an art-hungry kid in small-town Texas.

Eschewing the traditional gallery system and the Jeff Koons/ Damien Hirst “Art Star” model of bajillion-dollar consumer objects, Snyder plans to give away “handmade goods to people for no cost.” These goods, including stickers, drawings, and T-shirts, constitute artmaking as un-commercial giftmaking. Snyder shared a website showing the work of Alejandro Cesarco, who made a documented project of sending bouquets of flowers to various recipients and retaining only the receipts: this act stands, Cesarco says, as “An act/performance for a public of one; micro-relational politics. A way of making someone happy.” Snyder intends also to make two 15-minute videos, entitled “Capture” and “Escape,” which he will give away in VHS form, as, he says, “CDs/DVDs are so disposable and easily destroyed that I felt like the videos deserved more of a permanent home.” With you. 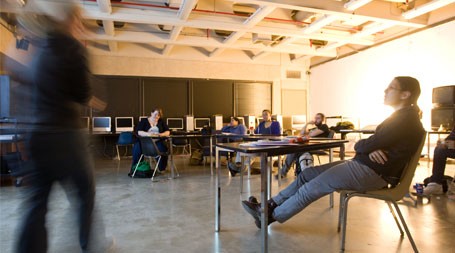 Gudiño screened an online video of Charles and Ray Eames’s legendary 1977 short film, “Powers of Ten,” which explores the mathematical nature of human perspective and the relative scale of the universe in powers of 10, one power of 10 per 10 seconds of film —zooming from a couple picknicking on Chicago’s Soldier Field, out to the observable borders of the observable universe, and back to the atoms composing the man’s hand. Gudiño’s yet-untitled Luminaria piece will employ video design and animation in order to investigate the tradtional educational presentation of the human body, the geometry of the material world, and a loopy vision of a mythic, semi-abstracted, animated universe.

In his in-class Powerpoint presentation, Mata presented his project influences, including a cardboard shelter erected by a (presumably homeless) “unknown artist” in Houston; Argentinian artist Rirkrit Tiravanija, who engages in social gestures such as sharing meals with show-goers and constructing temporary structures; Thomas Hirschhorn, who employed politicized site-specific installations using propaganda posters and cardboard; and referenced Nicolas Borriaud, a French curator and art critic who coined the term “relational aesthetics” in order to describe the role of deejaying and other social memes as a form of contemporary artmaking. Mata plans to construct a “safe house” on-site at the Convention Center entitled “New Media Shelter”, in which participants can read materials pertaining to New Media, watch short clips, and interact.

Hurt’s Luminaria concept is infused with the idea of the internet as already-existing “future utopia,” in which online avatars augment, obscure, or substitute for our physical-world identities, transcending gender, class, sexuality, and race to engage in meta-dialogue. To that end, Hurt directed our attention to mathwrath.com, wherein we witnessed a hilariously awkward “online date” between Skype-like video captures of a man and a woman seated uncomfortably at a graphic of a dining table, while a video clip of a violinist held sway. Hurt also showed us an online video of hacker Jake Elliott discussing “online countercultures” (mediaarthistories.blogspot.com/2008/07/dirty-new-media-jake-elliott-2008.html). Hurt, himself a deft and funny video performer, plans to employ avatars in order to explore and subvert identity.

Brown’s planned video installation, “No Borders,” was influenced by, among other things, Jasper Johns’s “White Flag” painting, in which an American flag has been whitewashed. Brown intends his video installation to depict, through camera movement, a literal ascent up a flight of stairs, representing hopeful shared sociopolitical evolution. He will also employ the images of a flat, flawed, 2-D political map from the past, a globe drawn with current political borders, and finally a globe without colored political boundaries, symbolizing the future. “The future, as I wish it to occur,” he says, “will be a time and place where people fight to smash all the borders that separate us. Racism, sexism, and nationalism will be things of the past. Humanity will confront problems collectively, benefiting and suffering in unison.” •