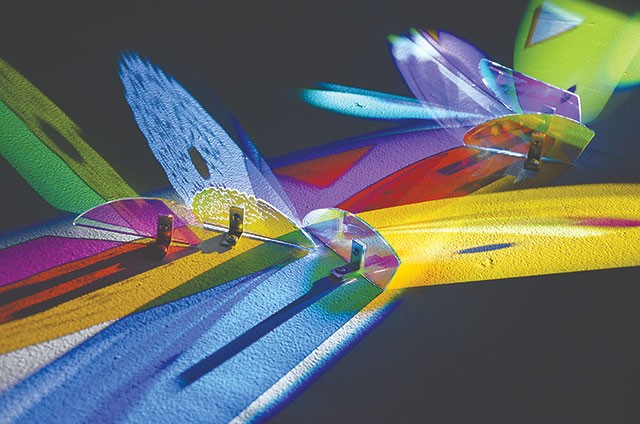 If you missed Luminaria this year because you were out of town, stayed home because you thought it would be rained out, or just hate crowds, hear this: The party’s over, but a little bit of SA’s annual art blow-out in HemisFair Park lingers on. “Luminaria 2013,” an exhibition filling the ground floor at Instituto Cultural de México, remains on view till April 14. While Luminaria, the event, combines a ton of music and performance along with visual art, the show at the Instituto stays close to the theme of the Nuit Blanche (White Night) art fest in Paris, France, that inspired our festival. It’s all about light. Some of the works have an implied narrative. If you enter through the dark curtains blocking the entryway furthest from the front door, you’ll encounter Kia Neill’s glowing installation hanging from the ceiling like magic fruit in a movie filled with swords and sorcery. It’s fun, and it works; made of LED lights wrapped in paper, with burlap, cut aluminum cans, and Spanish moss mixed in too, the illusion of a dark forest is more successful now that the crowds have left, leaving the light blocks undisturbed, and the room darker. If you saw it during Luminaria, come back.

Outside the closed room is a darkened hallway, the site of a series of pieces by Chicago team Melissa H. Potter and Paul Catanese. The artists embed glowing wire in paper to form rough geometries that have a rune-like quality, and like Neill’s work, hint at story. But whether private symbols or just shapes, it’s the eerie glow that captures one’s attention.

Also from Chicago, Michele Graves has constructed a “breath machine” to meld light and language. Exhale into the contraption’s mouthpiece, and be rewarded with a word projected in light that then travels towards a phrase-filled mural on another wall, changing into a beam that lights up a matching, or complimentary, set of words.

SA’s Cathy Cunningham-Little uses light to explore the act of seeing rather than mime a story, and is known for her light boxes and colored glass hanging sculpture (to see a large, recently installed piece, visit University Health System’s new Robert B. Green Clinical Pavilion). Last year at Sala Diaz she explored light refraction in a small wall piece that cast beams of colored light across the wall. Her room at the Instituto compounds the effect with several similar light-casters, radiating a rainbow of color on three walls. Science can be so freaking cool.

Brooklyn’s Carol Salmanson presents a simple, but disturbingly successful, installation. Made of Plexiglas, vinyl, and lined with rows of tiny LED lights, her 10 boxes are electric minimalism and something disquieting, too. Attached to the walls in a sequence that goes now higher, then lower, the pieces refuse to resolve as a line, or separate into discrete objects. The effect is quite physical — one’s sense of balance is disrupted. Visits to this room tend to be short.

Near the exit (or other gallery entrance, if you choose to enter through the near passage) is an eight-foot tall three-sided pyramid by SA artist Jonathan Sims. Vaguely sci-fi motifs — an interstellar language, perhaps — cover the object. One of the sides is missing; lines of small lights describe the plane instead, allowing one to see inside a smaller triangle, a pyramid within a pyramid. Whether due to prominent position, or easily read theatricality, it attracted a lot of attention during Luminaria, the festival, but now seems a bit lost in the quiet rooms. Perhaps it needs a curious crowd to thrive.

An installation by artist collective The Lullwood Group merits mention, though it’s no longer on view. In the now closed Frida Kahlo gallery in the rear of the Instituto, glowing balloons filled the floor, and lit weather balloons hung down. Projected colored light mixed with all, while the collective’s members, clad in white uniforms like demented lab techs, walked about the crowd with silver balloons (yes, that’s a Warhol reference) acting goofy, occasionally walloping each other with the bags of air. Huge fun. Please, do it again.