Luminaria 2015 Will Light Up The San Antonio Museum Of Art 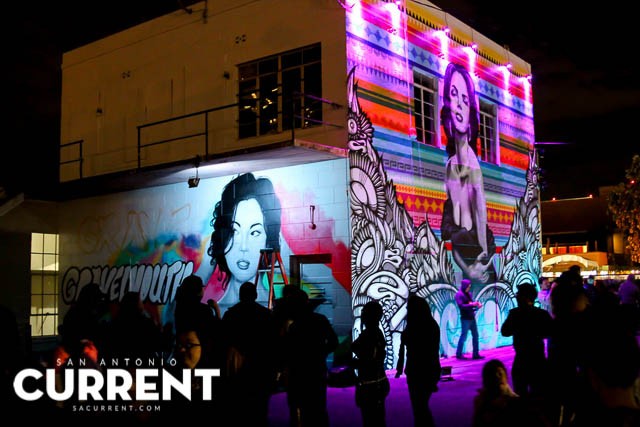 For two days in late October, San Antonians will see a stretch of the Museum Reach from the San Antonio Museum of Art to Maverick Park light up for the 8th annual Luminaria.

The transportation agency is partnering with Luminaria this year by providing service from the Crossroads park-and-ride to Maverick Park for immediate access to the event. And its blue circulator route is being extended along N. Alamo St. and Broadway to serve Luminaria. You can find more info here.

With 31 different locations, all within walking distance of SAMA, festival-goers will be able to immerse themselves into another world of art, music, performance and light, albeit in a familiar place from October 23 to 24.

After the tour, we all gathered in SAMA's courtyard with all of the artists.

Joey Lopez and Andrew Valdez, members of the Convergent Media Collective, had a table laid out with tortillas that had images burned on them. They used a laser to burn the images, breaking the age-old mystery of how Jesus or the Virgin de Guadalupe end up on tortillas.

They hope to set up a photo booth at Luminaria to take pictures of people and then use a laser (they are still raising the funds for it) to burn those images onto tortillas — because why not?

Erik Sanden, singer for the art-rock band Buttercup, said they'll be performing at Luminaria 2015, and will incorporate pieces of a collaboration with artist Chris Sauter for Buttercup's song "Anti-Antarctica."

You can watch the video below, but here's how Buttercup describes it.

A filmed performance by Buttercup is slowly eroded as the wall onto which the performance is projected is methodically cut apart to fashion a scale replica of a volcano.


Sanden said the collaboration has been shown in galleries in Istanbul and Berlin. It will soon head to Prague.

Anti-Antarctica from Chris Sauter on Vimeo.

However, this has just been a small sampling of the diverse bodies of work that will be featured in two nights of creative experiments bursting with original work while pushing boundaries.

Here's a look at some of the faces behind Luminaria 2015.