Luminaria 2016 Set For Next Round in Downtown East 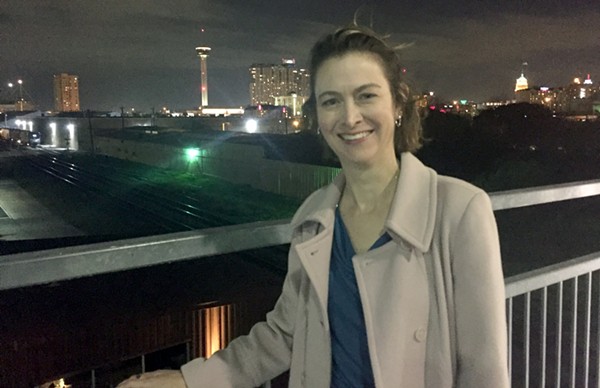 Luminaria has a new home for 2016. The local contemporary arts festival will take place in Downtown East, a neighborhood deeply rooted in African-American history and culture. The announcement of the festival’s new location for this year was made by Luminaria executive director Kathy Armstrong and other city leaders Tuesday night on the Hays Street Bridge.

“Luminaria is moving to the Eastside, ya’ll,” San Antonio District 2 councilman Alan Warrick told guests during the press event. “There are great things happening in District 2. [Luminaria] will bring new exposure to the neighborhoods.”

A lot of this exposure, Warrick said, is because he sees the freeway that splits Downtown San Antonio from Downtown East not being as much of a barrier as it has in the past since more and more revitalization is happening in the area.

“We have a number of new establishments opening up in this part of the city,” Warrick said. “There are great things happening in the community and with businesses.”

Felix Padron, executive director of the City of San Antonio’s Department for Creative and Cultural Development, added that bringing more local art to the Eastside could only help the district in its efforts to lure new residents and enterprise.

“Creativity and the arts are really an economic asset to San Antonio,” Padron said. “Luminaria coming to Downtown East is really a testament that everyone wants the arts to be part of their story. We wanted to expose the urban core of downtown and use the arts as an activator to really define various destinations to work and play. The arts can really attract the community.”

Yonnie Blanchette, executive director of the Carver Community Cultural Center on the City’s Eastside, knows a thing or two about the positive impact the arts can have in a community. Blanchette is excited to be one of the partnering organizations of Luminaria this year because it allows her and others to show a different view of what the Eastside can provide.

“Typically, what is offered about the Eastside is not always so pleasant,” Blanchette said. “We are delighted to have the opportunity to showcase the other side. We look forward to this year’s collaboration as we celebrate the history and the culture of San Antonio’s East Side.”

Although there are not set dates for the festival just yet, Luminaria anticipates having programming that extends from Wednesday, Nov. 9 -Sunday, November 13. All artists of any genre or medium can submit a proposal for Luminaria from April 1 – May 5 at LuminariaSA.org.