Luminaria Celebrates Its 10th Anniversary with a Return to Hemisfair 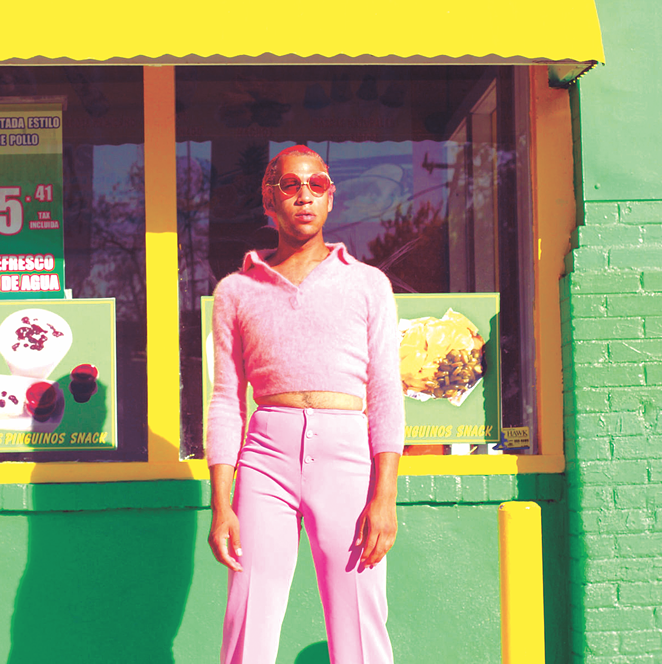 For those of us who remember the excitement and fresh joy of the very first Luminaria multimedia bonanza, which was hosted in and around Alamo Plaza, it’s hard to believe that the fest has been bringing the arts to light for 10 years now.

Back in 2008, then-mayor Phil Hardberger, who has a laudable track record of supporting the arts in San Antonio, proposed Luminaria as something of an answer to Paris’ Nuit Blanche and Madrid’s Noche Blanca, two well-established, nighttime, all-arts blowouts with carnival vibes.

Since its beginning, Luminaria has traveled to a few different urban footprints, put on consistently excellent (and consistently improving) programs, improvised well when faced with mother nature’s fickleness, and gained a permanent year-round director in Kathy Armstrong (who took the reins in 2015).

For its 10th run, on November 10 and 11, Luminaria will return to Hemisfair (where it was held from 2011 to 2013) and present daytime offerings in Southtown The Arts District (STAD).

Armstrong told the Current that she’s excited to be partnered “with organizations that have a proven history of advocating and promoting the arts,” citing as examples the Mexican Cultural Institute, Magik Theatre, STAD, and the Universidad Nacional Autónoma de México (UNAM).

It’s worth noting, of course, that Luminaria isn’t returning to the same Hemisfair that hosted the affair years ago. Recent improvements make it an even more ideal locale for a nighttime arts festival like this. “In the redevelopment of Hemisfair,” Armstrong noted, “they worked with artists to create site-specific works,” showing the developers’ commitment to art in public spaces.

Of Luminaria’s staying power, as it celebrates its first decade, Armstrong is quick to pass on the credit to others. “It is a testament to the strength and growth of San Antonio’s arts community,” she said.

While our best recommendation would be to try to see, hear and experience as much of Luminaria as you possibly can, we’ve assembled a bit of a primer on what to expect and what, especially, is not to be missed. For exact timing on specific events and the full lineup of featured artists, visit luminariasa.org.

Music
In terms of musical acts, Luminaria has typically focused largely on the local side, embracing traditional sounds as well as newer, more experimental projects. This year’s musical program is, quite possibly, Luminaria’s best yet. Curated mostly by local musician Garrett T. Capps, the lineup boasts local, national and international talent, representing an array of styles. First and foremost, Baltimore’s Lower Dens will return to San Antonio for Luminaria, bringing its psychedelic, shoegaze-influenced brand of dream-pop to the Main Stage on Friday night. Performing directly before Lower Dens on the Main Stage will be Austin experimental electronic/psych-pop crew The Octopus Project, whose oft-cinematic music is practically tailor-made for an artful turn up in a vibrant urban area. On the international front, Japanese avant-garde percussionist and acoustic sound artist Tatsuya Nakatani, known for challenging perceptions of beauty in music while still appealing to more traditional aesthetics, will perform an entirely improvised composition in Yanaguana Garden (also on Friday). Other acts playing on Friday include Henry Brun & The Latin Playerz, heavy surf outfit King Pelican (performing an instrumental/visual piece about the 1968 World’s Fair at Hemisfair) and the flute and percussion act Peterson/Hayes Duo. This year’s Luminaria will also feature a stage at Magik Theatre curated by the folks behind the groovy K23 music venue, which will feature Los Angeles-based experimental/psychedelic artist Jerry Paper as well as a few talented locals. Saturday night’s closing party will feature promising new-school R&B artist AMEA and pop dynamo Wayne Holtz. 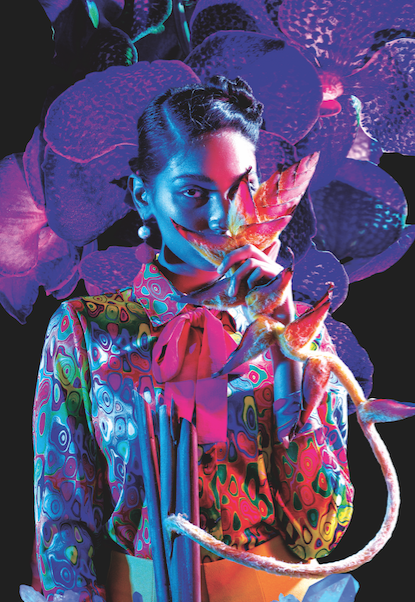 Visual Art/Installation
Luminaria’s bread and butter has always been its visual art offerings, which often incorporate the use of light in unique ways. Curated largely by Artistic Advisory Committee members Joe De La Cruz (visual artist and head of Silkwörm Studio & Gallery) and Maritza “Blu” Vasquez (visual artist and Exhibition Committee head of Blue Star Contemporary), this year’s slate of artists promises to continue the tradition of excellence. Though there are too many talents to possibly mention them all, we are especially stoked to see a new installation from forward-thinking arts collective Essentials, which will present “Biochromatic,” examining the “limitations and exploitations of human perception,” Bill Simons’ illuminated sculptures, Julia Barbosa Landois’ “two-dimensional walking meditation labyrinth made out of repurposed materials found in the aftermath of Hurricane Harvey,” the premiere of Miniature Curiosa’s mysterious live-projection puppet show The Clown Was Stung by Wasps, a glow-in-the-dark mural from Barcelona’s Reskate collective, screenings of Sarah Fox and Jared Theis’ animated short Sea of Love, and Artpace Teen Council’s augmented-reality exhibition, which will allow festival-goers the opportunity to explore digital art scattered throughout the footprint using their smart phones. We are also looking forward to the unveiling of La Monarca, a new solar mural created by Cruz Ortiz in collaboration with the Land Heritage Institute that celebrates San Antonio’s status as an important migratory stop for the Monarch butterfly. 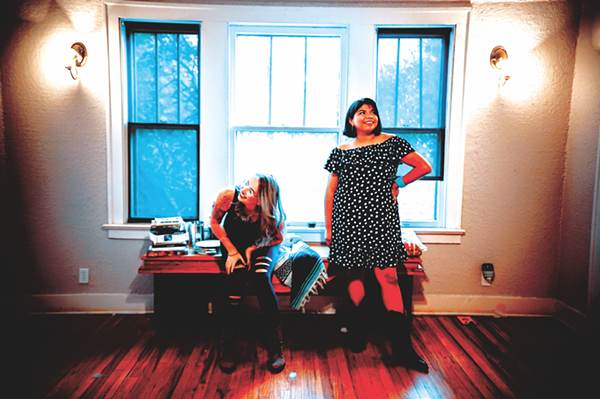 Literary Arts
In the realm of literary arts, Luminaria has frequently found inventive ways of showcasing writers and their work, aside from the traditional reading format. This year, curated in part by San Antonio Poet Laureate Jenny Browne, will include a few literary adventures we’re especially intrigued by. For starters, Caesura, a collaboration between San Antonio writers Melanie Robinson and Claudia Cardona, which takes as its mission “visualiz[ing] a future where poetry is tangible and accessible to all, a world where poetry isn’t intimidating,” will present a three-room installation entitled “Ololyga: Think Like a Mouth” at UNAM. In a quest to present poetry in an interactive and informative manner, this exhibit will “highlight women of color, queer women, and local women poets who are fundamental to the history of poetry.” Meanwhile, House of Trees will present “Word Around Town” (which some might recognize from the Alta Vista neighborhood), a public poetry project that adorns marquee signs with snippets of poetry (in this case from John Philip Santos and Naomi Shihab Nye) meant to provoke reflection. Other literary/spoken-word happenings will include a performance of Gente Talk: Testimonios from San Antonio by Marisela Barrera and sets from stand-up comedians Larry Garza and Ben Jackson.

Performance
It wouldn’t be an arty party without a variety of performances that offer kinesthetic thrills to generate the electricity that helps keep festival-goers energized throughout the evening. This year, we are particularly looking forward to performances from A’lante Flameco, Esther de Monteflores (with Tiny Cities, an absurd celebration of the common pigeon), CRITT Project (which will present a choreographed dance that explores the ways in which humans can alter the form of their own realities), and Ballet San Antonio, which will present Something Stupid, riffing on a quote from French symbolist poet Paul Valéry: “Love is being stupid together.”

Slideshow 30 Artists to Look for at This Year's Luminaria 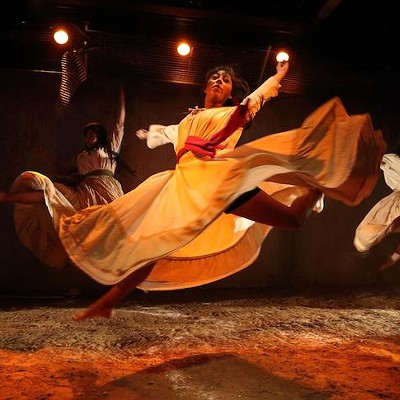