Luminaria Gets a Do-over 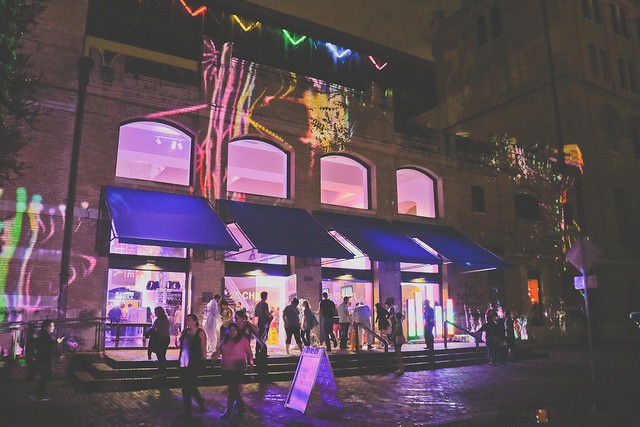 Rain put a damper on Luminaria this year. The city's annual downtown arts festival, which moved its footprint to the area around SAMA, was scaled back from two nights to one, and most of the outdoor events were cancelled.

Now Luminaria organizers will try again, but on a much smaller scale.

Next Friday, former Artpace International Artist-in-Residence Chris Sauter joins Buttercup for their long-anticipated collaboration "Plato's Drums.” some details on what to expect.

Buttercup and Sauter have built a giant free-standing wall in an abandoned space (on the northwest corner of Jones and Broadway). By removing material from the wall, Sauter is building an actual sized sculptural replica of Buttercup’s drumset. The sculpture is composed of 400+ individual pieces cut out of the wall, the result of hours of labor and much sweat and some of Sauter's DNA. Sauter has filmed original images of Buttercup to project onto this structure, and onto the band as it plays within the structure ...

... “Plato’s Drums" is a nod to Plato’s Allegory of the Cave where a group of men are shackled to a wall and cannot see what is going on behind them. They only see shadows on the wall cast by the puppeteers behind, so Buttercup wrote several new songs and rerecorded a few other old songs to fit this theme. Our songs for the piece are about misinterpretation, blindness, the ego and drumming. One is about Helen Keller, the most remarkable underdog. "Parallax View" speaks of the dangers of the ego in the effort to construct truth from fragile human memory.


Buttercup and Sauter were all set to go as planned for but the rain and hurricane-force winds destroyed their makeshift wall, sending them back to square one. They're working hard to get the installation up and running again.

Like Luminaria itself, the Buttercup-Sauter collab, set for 7 to 9 p.m on Friday, November 13 at 1101 Broadway, will be free. And just in case God once again plays a cruel joke of Luminaria, they are prepared with a rain date, Saturday, November 14, same time, same place. And, yes, there will be food and beer.

"Plato's Drums" will be the first of many nights of programming, dubbed Luminaria Take Two. Visit luminariasa.org for details.