Luminaria Lights up SAMA and Maverick Park for Its Eighth Incarnation

Due to expected severe weather, Luminaria has cancelled and/or postponed a number of outdoor events and exhibitions. Indoor Luminaria events will go on as planned. For a list of Luminaria cancellations, click here.

In its first seven years, Luminaria has showcased more than 3,000 artists in multiple disciplines and brought in over one million attendees. A momentous celebration of culture, Luminaria has helped grow the reach and strengthen the community of San Antonio art and artists, while also bringing diverse national and international talent to the Alamo City.

Over the years, the contemporary all-arts festival — originally proposed in 2008 by then-Mayor Phil Hardberger as a local answer to Paris' Nuit Blanche and Madrid's Noche Blanca — has wandered from the Alamo Plaza area to La Villita, to Hemisfair Park and, most recently, to the area surrounding Central Library and the Southwest School of Art. This year, the roving multi-genre arts extravaganza will take over the San Antonio Museum of Art and the surrounding areas on Jones Avenue, all the way to Maverick Park. As we gear up to experience what could very well be the best Luminaria yet, the San Antonio Current spoke with Kathy Armstrong, the newly appointed (and first ever) year-round executive director of Luminaria, about her role and the changes we can expect this year.

Tell me a bit about yourself, how you became executive director of Luminaria and what your specific roles are in that position.
I moved to San Antonio about 20 years ago. And for most of the time since [18 years] I've been the exhibition director and curator at Southwest School of Art. I love being involved especially in the community aspect of art and I love showcasing local artists of all types. This position as director of Luminaria is a dream come true because it allows me to expand my knowledge and understanding of all the wonderful music and art in this city. This position is very different, because I'm not a direct curator. As executive director, aside from overseeing all the setup and operations, I got to select the members of the Artistic Advisory Committee, who are six people that live and work in San Antonio and are in touch with different aspects of the art scene here. When I took the position, back in March, I quickly appointed those individuals, nailed down the dates, reached out to the San Antonio Museum of Art and met with their contemporary curator Anna Stothart. How did this SAMA partnership come about? This particular footprint at SAMA had been under consideration for a few years. We are using all of their grounds and their auditorium for this event. But, I'm also excited that we are partnering with surrounding businesses and using Maverick Park and the adjacent space.

Looking forward, will you move back to Downtown proper, have a roving locale or stay anchored at SAMA?
The idea is to keep moving. That way we can showcase different neighborhoods, institutions and businesses around the city.

Well the SAMA location is certainly a change, but what other changes can we expect with this year's Luminaria?
One of the things that we brought back this year is the open call for artists, which opened in the spring and closed in June. Even though the members of the Artistic Advisory Committee and I have all been involved in the arts in San Antonio, the open call really gave us a reminder of the wealth of talent in our community. The open call provides a great opportunity for artists who are under the radar or who have maybe just worked in different subsets than we are familiar with. There is such a broad array of artistic activity in our city.

So the open call is one of my favorite accomplishments so far, because it allows for this kind of plurality and breadth. It's actually a combination of invitation and open call, I should note. The Artistic Committee was given the ability to invite artists, along with selecting artists from the open call. It's really the best of both worlds.

The Artistic Advisory Committee worked tirelessly reviewing the submissions, scoring them individually and then comparing. It was not an easy task, to say the least. But, I'm proud of the truly diverse program that they've put together.

Another significant change for this year is that all works were required to be created specifically for Luminaria, unless Luminaria is also the Texas or U.S. premiere.

In what ways is Luminaria beneficial to San Antonio?
There are really two aspects to the benefits. For the artists, we give them a large audience and seed money, along with incentive to create new work. As a positive side effect, we bring together artists of diverse mediums and backgrounds in a setting that encourages cross-pollination and a sense of artistic community. For the city, people get to be exposed to artists, local and otherwise, that they might not normally have experienced. Also, people gain a deeper appreciation for the businesses and institutions within the footprint. 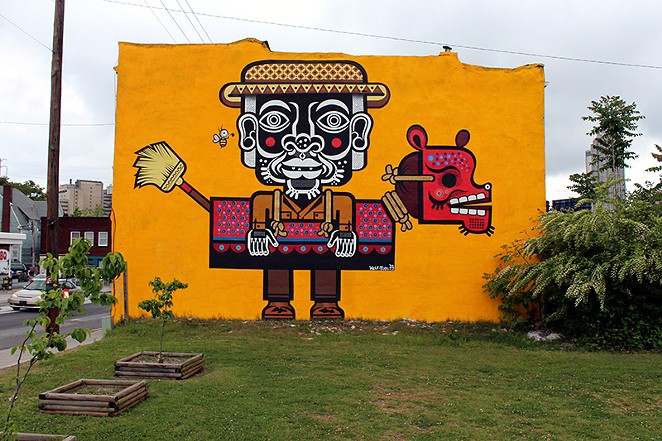 To get a better feel for the nuances of the Artistic Advisory Committee's operations, we also spoke with Committee member Chis Smart. Smart is a Trinity University graduate and veteran San Anto musician who has fronted several bands, toured internationally and is now working with singer Chrysta Bell, performing music she co-wrote with David Lynch.

Tell me a bit about how the Artistic Advisory Committee works. With so many entries and six people on the committee, how were decisions ultimately reached?
We're a pretty democratic group. Everyone rated the entries independently and compared notes later, which gets interesting when my "nine" is someone else's "three." If you're really passionate about an artist, it's up to you to convince/coerce/convert the non-believers. Each of us specializes in a different field, however, so there really weren't many battles.

What was the biggest challenge you faced with the committee? What about your favorite accomplishment?
It's my first time to be on the curator side of the table so I had to get up to speed pretty quickly with how things are done. This year the committee made a definite decision to push the contemporary aspect of the festival by bringing in more cutting-edge performers. I'm super excited to have internationally acclaimed minimalist composer William Basinski and avant-garde, drone guitarist Stephen O'Malley, from the band SUNN O))), making their only Texas appearances at Luminaria this year. San Antonio rarely gets to outdo Austin in the music arena.

What do you think is better about the open-call approach vs. the curatorial approach that was used last year?
Open call tends to be the accepted format internationally for a lot of festivals so most visual artists are familiar with it. However, musicians are less acquainted with the process and I think there were several bands who might have been a bit intimidated by it. Hopefully we can improve on that next year. In general, open call allows more people to get involved.

What do you see as the value of Luminaria for our city?
San Antonio has always embraced the cultural arts, but has been rather shy about the contemporary-arts side. With the city growing and new people moving here from all over, that's finally changing. Luminaria is the perfect place to get acquainted with the more cutting-edge side of music and art that's happening in our city, country and world.