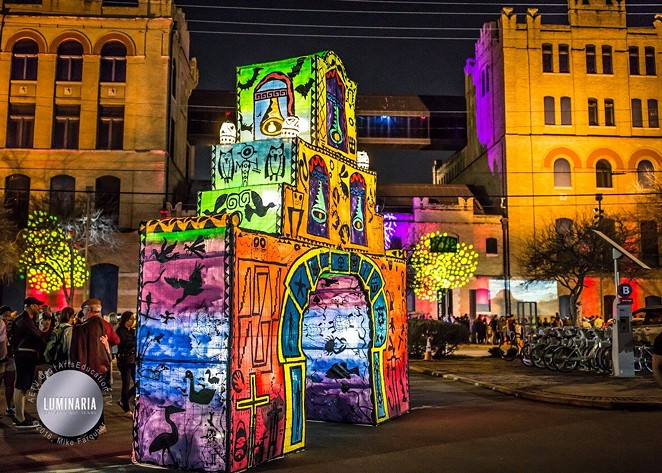 Supersized cicadas, a jumbo take on Twister, a meditation temple and a Miami-based artist known as HotCheetoMami are but a few of the curiosities to expect from this year’s Luminaria, the multimedia arts festival launched by former San Antonio Mayor Phil Hardberger back in 2008.

In preparation for its third consecutive year at Hemisfair, the nonprofit organization welcomed a new team of curators — Amber Ortega, Christopher Rodriguez, Gary Sweeney, Katherine Sotelo and Libby Day — to help vet project proposals from around the world. Boasting an eclectic array of presentations by more than 50 local, national and international creators taking place on multiple outdoor stages, indoor venues and points in between, the kid-friendly event won’t be easy to fully absorb without an informed plan of attack (visit luminariasa.org for a map, schedule and full artist lineup). In addition to the light projections and illuminated installations that have become Luminaria hallmarks, the 12th annual affair brings together works tackling such timely themes as intersectionality, immigration and LGBTQ* identity.

After kicking off with a few words from Mayor Ron Nirenberg, the festival’s Main Stage (on the north side of the Magik Theatre parking lot) will host Denver-based acrobatic fire spinners Lunar Fire, local artist Amalia Ortiz’s punk-rock musical The Canción Cannibal Cabaret and psychedelic rockers the Holy Knives, among others. Several promising highlights of this year’s fest take place on the Film Stage (on the river level outside the Convention Center), including a collaboration between “life-affirming art-rock” band Buttercup and Emmy-winning filmmaker Alejandro DeHoyos, Edward Tyndall’s documentary exploring Cheech Marin’s famed Chicano art collection, local artist and educator Sabra Booth’s animation Walled Off, which looks at the damaging effects of Trump’s border wall on the National Butterfly Center in the Rio Grande Valley and Mrs. Clean, a short film by 20-year-old YouTuber Daisy Cornejo (aka HotCheetoMami).

Other site-specific creations to look out for as you navigate the park alongside a projected crowd of 20,000 include Austin-based Robert Bart’s “giant glowing cicada shells,” former Texans Tom Turner and Carol Cunningham Turner’s inflatable, interactive Mission Moon Glow, Canadian artist Justin Tate’s Twister-inspired painting installation Touch Me and a collaborative installation by theater artist Marisela Barrera, vocalist Alyson Alonzo and photographer and curator Kristel A. Orta-Puente. If all this leaves you wanting a bit of peace and quiet, seek out Nigerian artist Olaniyi Rasheed Akindiya’s Asopomora – Connectivity, “a woven canopy temple featuring a meditation space for viewers to reflect on generational connectivity and perceptions of home.”