Lunchtime Snob: Beto’s brings the flavor to the other end of Broadway 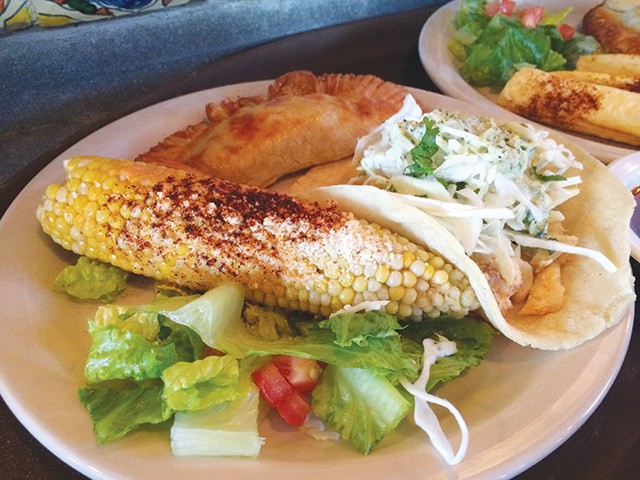 For me, Beto’s Comida Latina (8142 Broadway, (210) 930-9393) embodies the San Antonio culinary experience–it’s delicious, filling and not too serious. The restaurant sits on Broadway, just inside 410. I feel sorry for that area, since the Lower Broadway and Pearl folks steal all of the attention. It’s a shame too, because local food is plentiful over here, with Taco Garage and Vegeria nearby.

Beto’s often gets lumped in to the Tex-Mex category, but it’s really more of a Latin restaurant, with complex flavors, plenty of citrus notes and lighter fare overall. The menu is split into four categories–tacos, empanadas, quesadillas and burgers. I don’t know why you would ever order a burger here, so I ignored that category.

So many tempting options make for decision paralysis. Beto’s offers diners handy meal combos–choose one, two or three tacos, empanadas or quesadillas for a combo meal, complete with rice and beans and a salad. Or swap the sides for roasted veggies, fideo, roasted corn or yucca fries. All combos are under $13.

If you’re attempting to eat healthy, you’ll want to try the grilled fish tacos with roasted veggies. The tacos have plenty of fish in them with a dribble of creamy poblano sauce. The roasted veggies are wilted and well-seasoned with a spray of cheese on top. OK, so the cheese and cream aren’t so healthy, but they’re damn good.

It’s hard to mess up a taco al pastor, but I’ve seen it done before. Beto’s gets it right with juicy chunks of pork and pineapple. It’s simultaneously messy, spicy and delicious. It’s been lauded by Texas Monthly, so you could say the whole state is a fan.

The quesadillas are tasty and well-done, but often unremarkable. And why should you bother with the OK, when you can have the awesome? And by the awesome, I mean the chicken poblano empanda. It is spicy and tangy with tender chunks of chicken in a baked pastry filling. Also delightful are the bean and cheese empanadas, which combine the familiarity of a bean and cheese taco with pastry.

Beto’s clearly thinks empanadas are its strong suit, as it offers sweet versions for dessert ($3.99 each). The guava and cream cheese empanada sounds like a terrible idea, but the guava cuts the richness of the cream cheese nicely. If you want sweeter, get the horchata. It’s like liquid Cinnamon Toast Crunch–sweet, milky, cinnamon-y. It tastes like your childhood in a glass.

The décor is half deliberately casual, half faux-bistro. The emphasis and money is clearly on the menu rather than the ambiance. And once you taste some of the food, you’ll agree Beto’s made the right call.