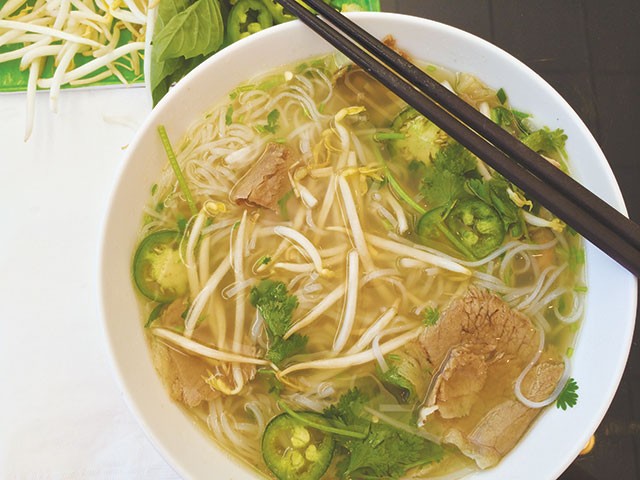 There’s something extraordinarily balanced about a big bowl of pho. Its warm, steamy broth base, tender noodles and savory smell create a cozy feeling, which isn’t exclusive to dinner either. Enter the weekday lunch, meant to be quick, filling, hopefully tasty and, most importantly, cheap. That’s where Pho Vy (8223 Marbach) comes in.

On the far West Side in the H-E-B Plus shopping strip on Marbach, is Pho Vy Vietnamese Noodles. Like most pho places around town it advertises itself simply: “We have pho.” Seems straightforward enough and based on the amount of restaurants in San Antonio specializing in pho, it’s clear people here like the Vietnamese noodle soup.

Visiting a pho restaurant and not ordering a big ol’ bowl seems sinful, but often times you can find treasures in other dishes on the menu. Here, it’s best to stick with the frontrunner. Most of the pho bowls are priced at $7.95 and are divided into three sections: “For the Beginners,” “Just the Regular” and “The Adventurer’s Choice.” The only differences in these seems to be the protein options, which includes fatty flank and elusive tripe. Pho Vy offers seven different meat choices with the option to add additional meat or seafood to any dish for $2 extra.

I ordered pho with eye round steak and flank and found myself hunched over the bowl, slurping the soft noodles, crisp bean sprouts and perfectly portioned steak (they don’t skimp here) without saying much to my fellow diner. This pho can do that to you. Once I finished and looked up, I saw other diners sitting back in a full-belly, time-for-a-nap state. The soup comes out quick and once you’ve added the accompanied ingredients to your liking, it’s smooth sipping and guzzling from there.

The chicken noodle soup is another solid bowl with thinly sliced chicken breast and a lighter broth. After trying the grilled pork meatball in the spring roll appetizer, I started to second-guess my pho protein choice, but that means I’ll have to go back.

If you find yourself looking for something a little more wholesome than a sandwich or salad, try Pho Vy, which bills itself as the “health-conscious choice,” for lunch. The warm bowl of fragrant broth may make your day a little more comforting.