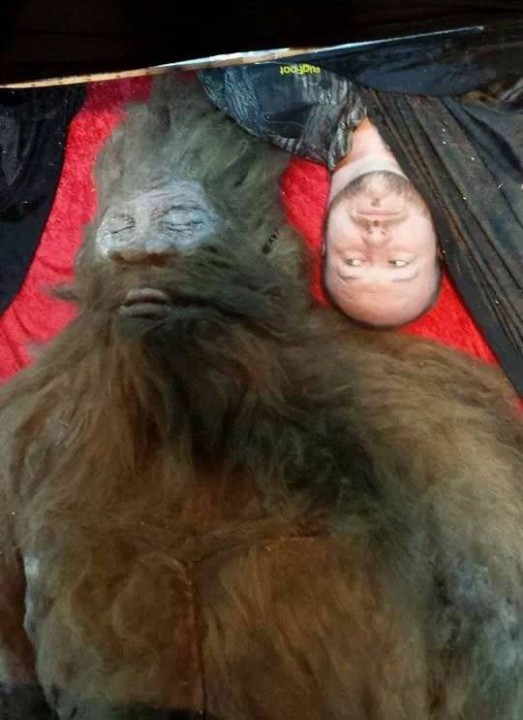 Lying sack of shit Rick Dyer has admitted to being just that. The self-proclaimed master tracker confessed on Facebook that the Bigfoot he claimed he shot in far west San Antonio and subsequently put on display was the hoax it so very obviously was.

"Coming clean about everything is necessary for a new start!" Dyer said in a rambling, typo-ridden post that displayed his lack of grasp on English grammar. "From this moment own [sic] I will speak the truth! No more lies, tall tales or wild goose chases to mess with the haters!"

Dyer copped to his con after a fallout with members of his crew, including spokesman Andrew Clacy.

“I confronted Mr. Dyer in Daytona on my suspicions (of authenticity), (and he) admitted to me personally that the body of 'Hank' was not a real body, but rather a construct of a company from Washington State which was paid for by Rick Dyer,” wrote Clacy in a statement to the San Antonio Express-News.

Clacy did not clarify what took him so long to make such an obvious conclusion.

The body was in fact, an eight-foot figure made of foam, latex and camel hair created by Chris Russell of Twisted Toy Box.

Hundreds had lined up to see the obviously fake body when it was put on display at a sold-out event at the Alamo Drafthouse Park North last month. Spectators were charged $10 to see the body, or $20 dollars to watch a Bigfoot documentary and participate in a question and answer session with the master tracker/lying con artist who lies all the time. Dyer never came up with the documentary. Alamo Drafthouse treated an audience with Harry and the Hendersons instead. Most paying customers walked out of the screening.

“We regret, and apologize for associating ourselves with Rick Dyer. What we thought would have been a fun and entertaining evening, ended up being a display of unethical behavior. We will not make the same mistake again.”

Dyer claims his hoax pulled in over $60,000 during his nationwide tour. A petition on Change.org urges the U.S. Department of Justice to charge the lying huckster who lies with fraud.

While Dyer, who pulled an almost identical hoax in 2008, admits that the Bigfoot body was fake, he maintains that he did indeed shoot Bigfoot in San Antonio, because the man cannot stop lying.

While thousands may have been duped out of money to see a fake Bigfoot specimen, they can watch a much more entertaining show for free, in which a pathological liar melts down on social media.