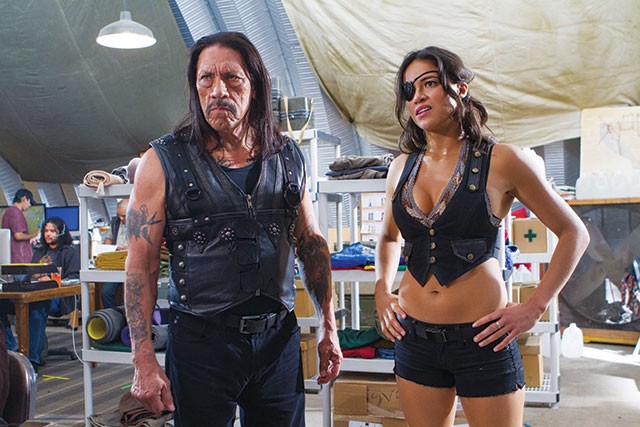 When Mexican director Alejandro González Iñárritu released his acclaimed Amores Perros (2000), the comparisons to Quentin Tarantino were as inevitable as they were off-the-mark. True, the movie had plenty of graphic violence and an unconventional narrative that went back and forth in time, but he immediately distanced himself from, say, Pulp Fiction.

“I like the way [Tarantino] plays with structure, but I don’t know why he gets the credit,” he told London’s The Guardian at the time. “It’s really William Faulkner; it’s a literary structure that has existed for a long time.” On the topic of violence, he was even bolder. “When you live in a city, as I do, where violence is really in the streets and people die every day, there’s nothing funny about it. We try to show that violence has a consequence—when you create violence, it turns against you.” He later went further, telling Uruguay’s El País that he’s not like Tarantino because “he uses violence for entertainment; I use violence to make a point.”

Robert Rodríguez is two or three notches below Tarantino in terms of dialogue, but he and QT share a common love of violence as entertainment and a natural talent in terms of shot composition (neither is Terrence Malick, but every shot is stunning in its own B-movie way), character development and editing. It was the editing, not the acting (and, especially, not the speaking) what made The Mariachi great. It was all of the above, coupled with a timely and merciless commentary on the political climate of the time that turned Machete into a powerful cult classic, flaws and all. Machete Kills, on the other hand, is Machete on steroids and in its most arbitrary manner: he triumphs when everything seems lost, and he’s captured when it seems he could’ve gotten away scott free.

It makes perfect sense that Machete Kills premiered on September 19 at Austin’s Fantastic Film Fest. Not Cannes, not South By Southwest, not Sundance. After all, that’s what Machete Kills is: an over-the-top (much more so than Machete), fantastic adventure where everything’s possible and nothing really adds up. Yet, it all comes together, because we’re in Machete mode, and we’re rooting for this cabrón that don’t take no shit from the white man.

A third of the way into the movie I had lost track of the body count. It’s bang, bang, bang, slash, boom, wherever and whenever Rodríguez pleases, to the point that the storyline is secondary: A solid Mel Gibson (Voz) plays a crazy billionaire/arms dealer wreaking havoc and Machete is hired by the government to stop it. That’s it. Everything else is just an excuse for Machete and half of the cast to shoot, maim and kill anyone for any reason. Or really, no reason at all.

But it’s hard to resist a movie full of colorful characters that always come to rescue the film and each other. Machete himself is as one-dimensional as he could be (new line: “Machete don’t tweet”) and he’s handled by a gorgeous Ms. San Antonio (Amber Heard) who, at least for a while, helps him battle Madame Desdemona (Sofía Vergara at her hottest, shooting from her metal bra and crotch); a bland Lady Freaking Gaga shares a character with four different actors (one of which is Antonio Banderas) and Demián Bichir (the best Mexican actor since Gael García Bernal and Diego Luna) is reduced to a poor man’s Heath Ledger as the Joker, until Rodríguez finally allows him to show his amazing range. It’s all non-stop twists and turns, one more insane than the other and, without giving it away, let me just say you’ll never see a helicopter the same way again.

“I was laughing because it was just so gratuitous in every aspect,” said Gibson in press materials. “At the same time, you kind of get into it on another level.”

What that level is, depends on you. If you liked Machete because of the way it denounced right-wing stupidity, you’ll be disappointed by Machete Kills. But if you’re the type that fast-forwards The Sopranos just to see the mob hits, or took special pleasure in Breaking Bad’s über-violent shoot-outs in “To’hajilee” and “Felina,” then you’ll love Machete Kills. And you’ll come back for more. And more. And more. Just like the movie itself.