'Mad Men' Returns to Reclaim its Past Supremacy 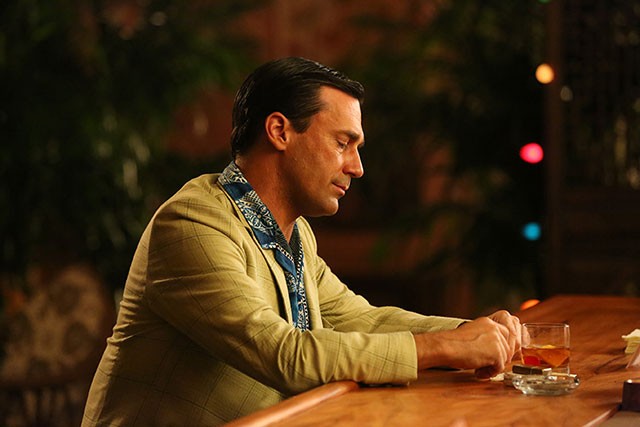 There are two men, both ravaged by war, trouncing their assorted affairs behind a bar at night. The younger man refuses the older gentleman’s offer to buy him a celebratory drink. He believes each generation is due its turn.

“Some day I’ll be the veteran in paradise,” he says. “I’ll be the man who can’t sleep and talks to strangers.”

Mad Men returned Sunday night with a two-hour showpiece for the AMC award-winning series. Showrunner Matthew Weiner wrote the episode entitled “The Doorway,” choosing to focus on the aging Don Draper, the rise of Peggy Olsen and the class wars of 1967 New York City through the eyes of a disturbing Betty Francis.

The character of Betty is one of shattered 1950s housewife ideals, a woman who rode  long on looks that masked the mind of a child. Her notion of spicing things up has her detailing a vivid way in which her new husband can rape the 15-year old guest in the other room. She even offers to hold the teen down. Scrape that jaw on the floor — there’s much more.

As a photographer invades Don’s private office for the company’s promotional photo shoot, Don finds himself confounded by the simple instructions to “Just be yourself.” Though the series has long captured the self-identification issues surrounding Don, “The Doorway” comes out swinging like Tyson. The struggle to remain relevant, not be overshadowed by his new wife Megan’s acting career and the disappointment in his once great craft, plague the character.

In true comical fashion, Roger Sterling finds wit that can only accompany the death of his mother. He shows the classic silver fox tact as he makes light of Don’s vomiting during the reception, saying, “He just did what everyone else was thinking.”  Though showing no remorse over his mother’s passing, it takes only the death of Sterling’s shoe shiner and the bestowing of the man’s box to Sterling to tear down the walls of this stranger to human emotion.

“The Doorway” also features a brilliant bit of cinematography as two scenes pan from a dismal and cold Greenwich Village flat to the lavish grandeur of the home for Sterling’s mother’s reception.  As Betty pokes about the inner city housing, she appears a caricature of the television show’s characters. Imagine Barbie landing in Escape from New York. The stark contrast between the 1950s and 1960s cultures gives the feeling that it doesn’t matter how powerful these ad men may be — their world is bound to fall.

One of the few things to brighten the doom off that gloom was the continued progression of Peggy’s career. She is praised for her latest work, saving a campaign from near disaster. Only Vietnam could ruin the phrase, “Lend me your ears.” What makes Peggy a standout character is that the brazen self-worth we see in Don has not found its way inside her, yet.

As snow falls, a doctor sets out for the hospital, leaving behind his wife in the company of narcissist Don. As the two lay in bed, she asks Don what he would like to happen this year.

“Not to do this anymore,” he replies.