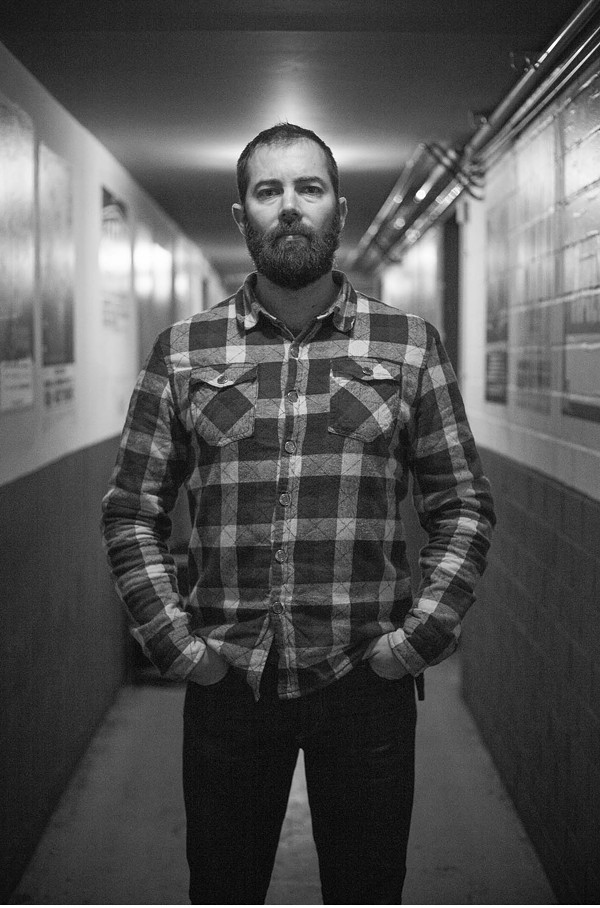 The first and only time I’ve had the pleasure of experiencing the post-metal musings of Russian Circles was in 2011 on New Year’s Eve in Austin. The show was amazing, and the band even stopped at midnight to hand out cups of bubbly to the audience to toast the arrival of 2012. When I found out the dudes would be coming back to Texas, and this time with the Eagles of Death Metal and fucking Mastodon, my heart skipped. The lineup is incredible. What’s also rad is seeing Brian Cook (who has played/plays in numerous other projects including my current favorite metal band SUMAC) live openly as a gay bass player in genres of music that are aggressive in nature and not known to be inhabited by many a queer folk. I recently had the opportunity to catch up with Cook and get his take on being a member of the LGBTQ community who has had an important role in the scenes of metal, post-metal and hardcore. Current: I realize that this must be a tough question to answer but out of all those projects you’ve played in, which has been the most fun and why?
Cook: I don't really have an answer for that, mainly because variety is the spice of life … By mixing things up and playing with different people, I've had a variety of experiences playing music. Sometimes it's fun to do something really casual with low expectations; sometimes it's fun to do something really ambitious and to watch how it plays out. Sometimes it's fun to be the ringleader; sometimes it's fun to be a team player. I saw that you wrote a review of Chelsea Wolfe’s new record on her website (unless it’s a different Brian Cook but I have a feeling it’s you). What artists and albums have you been listening to lately?
Cook: I've written bios for Chelsea for her last two records. Chelsea and Ben have been good friends with the Russian Circles camp for awhile now, and it's an honor to be trusted to help communicate their artistic intentions to the press. Most of my favorite records of 2017 have been made by friends: Chelsea Wolfe, Converge, Mutoid Man, Minus the Bear, Boris, Nordra, Cloakroom. But I've also been expanding my collection of krautrock stuff with stuff like the less revered CAN albums, later Popol Vuh, and Neu!-affiliated projects like La Düsseldorf and the Michael Rother solo LPs. I just picked up the German Oak reissue before leaving on tour, so I'm stoked to dig into that. Also been on a pretty regular diet of Lungfish and Zomes lately.

You’ve played in a million projects, is there any artist or band you've wanted to work with or genre of music that you want play that you just haven’t had time for?
Cook: There aren't really any well-known artists I'm interested in working with. I still get awkward around musicians I admire, so I don't imagine trying to collaborate with them would actually be that productive. I would love to do a really mellow record of some kind at some point. When I'm home, I play more acoustic guitar than anything else, and it would be fun to do something with some of that stuff. But for now I have a full plate. In the hardcore/metalcore band Botch, you were able to see the genre at its peak. Were you open about your sexuality at that time? And if so, what was the reception like from bandmates, friends, family and fans?
Cook: I began the process of coming out on Botch's first U.S. tour in ’97, but didn't really broadcast it to the broader hardcore world until ’98 when I started dating my current husband. Still, I was a gay bass player in a hardcore band full of straight dudes, so it wasn't as if my sexuality was a focal point of the band's platform. As far as reception goes, we aligned ourselves more with the more arty and political end of the hardcore world. We didn't give a shit about Floorpunch or any of that tough-guy hardcore. We were more into stuff like VSS, Monorchid, Unwound, and Engine Kid, and being a gay kid at those kinds of shows really seemed like a non-issue. Coming out to my family was a different issue all together, and that happened much more gradually. I'm fortunate to have cool parents, but they have a conservative background, so I knew it was going to be tough news to break. I spent a few years trying to drop hints before I finally came out. I think my dad saw it coming, but it was still a big shock to my mom. They've been supportive though. When I moved to Texas from Maryland in ’08, the hardcore/metalcore scene was still holding on in San Antonio. I sang for a metalcore project for a while and when people found out I was queer, I got a lot of “it’s so crazy you’re gay and can scream like that — weird!” Have you had any similar experiences as a musician that plays heavier music?
Cook: That's funny. Like, how do you think a gay guy is supposed to scream? Like he just saw a mouse in the tub? Fortunately, I never had anyone at a show come up say, "How do you play bass with a limp wrist?" Most of the awkward situations I've had as a musician in this scene involve other band dudes just calling each other "faggot" or saying "that's gay" or something equally ignorant in a relatively benign way. And usually once the person realizes I'm gay, there's some sort of awkward apology or over-compensating with talk about how they're "totally down" with gay people. Maybe it should bother me more, but I'm more embarrassed for those people than anything else.

You would think punk rock and metal would be pretty open to the LGBTQ community. but sadly you still hear about racism, and prejudice within its spheres. Did you ever feel unsafe or conscious of your queerness touring or just being in the scene in general?
Cook: Not really. I do agree that there is still a lot of ignorance in the punk and metal scene. But that's true of every social sphere. Hell, I'm ignorant on a lot of social issues myself. But I think most people in the punk scene are inherently empathetic when they're actually dealing with different people in real-life scenarios. I've travelled to some countries that are hostile towards the LGBTQ community, but the shows in those areas always feel like safe havens. Granted, I'm a pretty nondescript cisgender white guy. It's pretty easy to blend in, so my experience might be totally different if I was a gender outlaw or more confrontational regarding my orientation. Russian Circles toured Russia at the height of Putin's anti-gay agenda, and I was apprehensive of that, but after talking to the promoter, I felt comfortable doing the shows. However, our soundguy at the time opted to pass on joining us. As a gay man and a person of color, he wasn't comfortable going to Russia when he already stood out just on the basis of his skin color. And considering that I'd seen people sneaking pictures of him while we were walking around cities in the Baltic states, I totally understood his concern. But yeah, I've never had an experience like the one in green room, fortunately. Around the same time that I was in that metalcore band, I started playing rap shows and, for a long time, I made a conscious effort to communicate to the media and from the stage that I was queer, since I felt that visibility as a queer person was important — especially in hip-hop. What are your thought on your own visibility as openly gay metal musician. Is it important to you, or for a younger generation of LGBTQs who might want someone to look up to in a genre that resonates with them?
Cook: I think it's important to be visible. Part of that is purely selfish: I want to alienate homophobes. I don't want them at our shows. I just don't want to be around them period. And a good way of ensuring that happens is by being up front about being gay. In terms of visibility for a younger generation, I find that to be important, too, but I don't want to spend too much time thinking about how other people view me. I don't want to live my life trying to live up to other peoples' expectations. And that's partially because I think different young people who are coming to terms with their sexuality need different kinds of LGBTQ role models. Some kids might want a totally unapologetic, confrontational and extravagant role model. Some kids might just want to see someone they idolize treating their sexuality as a complete non-issue. And I think it's important for both of those examples to be out there and be visible. I certainly gravitated towards the latter when I was a kid. I didn't want to be in Priscilla Queen of the Desert. I just wanted to know that there were other gay dudes out there that liked Born Against and Man Is the Bastard. For me, a big obstacle with coming to terms with my sexuality was feeling like I had to change my interests or the way I carried myself because I was an out gay man. So. I think it's important for younger people who are figuring out their orientations and identities to just feel confident doing whatever the fuck they want, whether that's flying their freak flag or being a relative norm. So all I can do is be me. Saturday, October 14, Mastodon, Eagles of Deathmetal, Russian Circles, $39.50-$175, 7:30pm, Aztec Theatre, 104 N. St. Mary’s St., (210) 812-4355, theaztectheatre.com.