It's tough to make it work anywhere on minimum wage, and Bexar County is no exception.

A new map by Esri visualizes data from the Living Wage Calculator, a tool developed by Amy Glasmeier of the Massachusetts Institute of Technology, to estimate the amount of a living wage throughout the country.

The living wage is then contrasted with the minimum wage for a given jurisdiction. For Texas, that's $7.25 — the same as the federally-mandated minimum.

San Antonio's low cost of living places it in the middle of the pack for affordability compared to other metropolitan areas in Texas. And it doesn't come close to some of the country's most expensive areas, such as San Francisco, Boston and the Washington D.C.

But that's little consolation to thousands of low-wage workers in the Alamo City though, who are unable to make ends meet working full-time for $7.25 per hour. Here's the gap between living wage and minimum wage for the San Antonio/New Braunfels area: 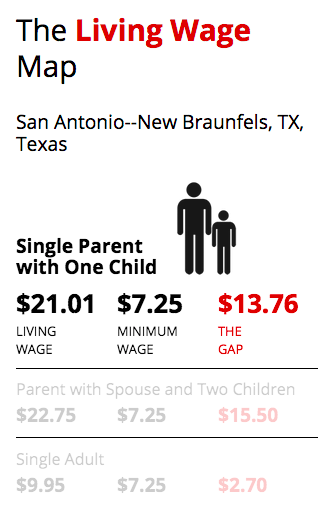 Texas law prohibits individual municipalities from raising the minimum wage on their own. An effort to raise the statewide minimum from to $10.10, spearheaded by Rep. Trey Martinez Fischer, failed in the Legislature this year.

The percentage of workers in Texas who make minimum wage or less has dropped since it peaked in 2010, but it's still higher than the national average, according to the Bureau of Labor Statistics. In 2014, 5.7 percent of Texas workers made minimum wage or less, whereas almost 10 percent of workers made that amount in 2010. The national average in 2014 was 3.9 percent.

The full map is available here.