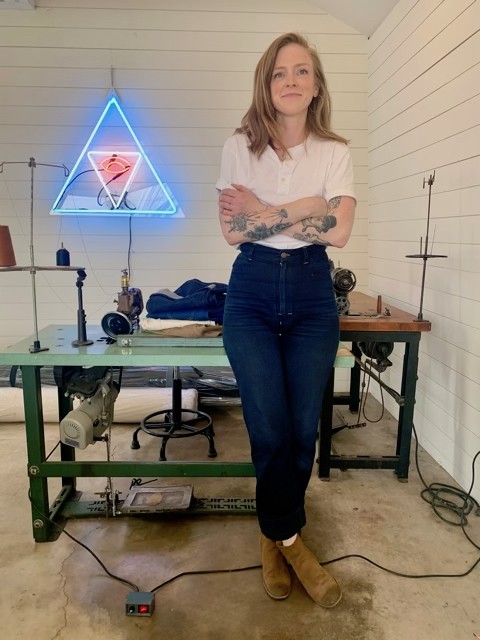 In the realm of garment construction, tailoring a pair of well-fitting pants is no easy task. Add sturdy denim to the equation and you’ve got a challenge that’s not for beginners.

A native of Toronto, La Rue learned to sew from her grandmother, but that skillset didn’t factor into her early professional pursuits, which were centered in film and music production. When she turned 30, La Rue visited Marfa for the first time and fell in love with the high-desert art mecca.

“Marfa was probably the one place I’ve been in the world — and I’ve been to a fair amount of places — that really, culturally and visually, felt so different from anywhere else I had been,” she explained. “I [first] went in 2015, and by 2017, I was going for six months and going home the other half of the year. … When I was out there, I met my husband. We got married in 2018 and moved to North Carolina after that.”

Work-wise, La Rue was seeking something different and found Asheville to be an attractive spot to start something new.

“My husband was like, ‘You’re a really good seamstress, why don’t you try to open up your own business?’ And so, I decided to make jeans,” she said. “Jeans are the thing that I wear the most, and it was one of the things that I have the biggest problem finding a good fit for.”

So, drawing from her own experience, La Rue set out to fill a void in the market by designing jeans specifically for women with hourglass shapes.

What ensued was a crash course that entailed long hours glued to YouTube tutorials, denim blogs and machinery websites — and eventually an online course in garment construction. But the sum of those parts wasn’t quite enough.

“I couldn’t even get my first pair of jeans past my knees,” La Rue confessed. “I realized pretty quickly I was going to need way more help than what the internet could provide me. So, I started reaching out to strangers in the craft to ask really basic questions … and that just snowballed into meeting so many wonderful people across the U.S. who were more than willing to share everything they could with me.”

Just as her upstart denim brand The Indigo Prophet was starting to roll — Asheville storefront and all — the COVID-19 pandemic took hold.

No one was visiting the store and all her sales were online. At the same time, her husband wanted to get back into the restaurant business. Based on their combined interests, they set their sights on San Antonio.

“You know when you decide that you want to go somewhere, but you don’t know where, and all signs randomly point to one spot? That was San Antonio,” La Rue said. During a visit, the young couple found the city to be approachable and filled with prospects. “There was just all this stuff that made it very easy. Plus, it’s beautiful here … the weather … everyone we’ve met is so nice.”

Since her February arrival, La Rue has set up shop in Olmos Park’s Brilliant Studio and become acquainted with like-minded makers including Mario Guajardo of The Richter Co. and Brontë Treat of Lunchroom Anxiety.

“Brontë and Mario and I are talking about doing some collaborations, which is really exciting,” she said.

We caught up with La Rue via Zoom the day after her first product drop of 2021 — 10 pairs of a high-waisted style dubbed “High Pope” that completely sold out.

Do you have a background in fashion or sewing?

No, I don’t have any fashion experience (laughs). Other than I like fashion … on a very subdued level. Do I like to read Vogue? Of course. But do I also just wanna throw on a T-shirt and a pair of jeans? Every day. So, I would say I’m more of a tomboy than a high-fashion person. It’s all very new, but I like it so far.

How does your brand differ from what’s already on the market?

So as a small-waisted, large-backsided woman — and there are quite a few of us, it turns out — it’s always really hard to find a pair of jeans that fits both measurements. You end up getting a pair of jeans that fits your hips [but has] all of this extra fabric up at the top, behind your back. We call it “back gap.” And it’s so frustrating. The only thing you can do to fix it is to dart your jeans … So, I would do that for myself and it turned out great. … My jeans aren’t for everyone. … But they work for a lot of women. I feel like big-butted ladies are out there just trying to find a pair of jeans that fit all of their measurements. There are obviously enough people that have that problem that we’re having a good year.

What’s the average price point? Does it vary based on the denim?

Do you favor a specific type of denim?

I stick to 100% cotton and don’t play around with stretch denim for the time being. As a consumer I have too many times been disappointed by stretch denim losing its shape after a few washes and then spending the rest of my relationship with those jeans trying to keep them from falling down or sagging on me. With cotton I find that the fabric relaxes the more you wear it, but it doesn’t lose its shape. It molds to the wearer and becomes something so much more than just a piece of clothing — like a trusted friend that you can always count on.

What are your hopes for the future of your brand?

I’m only one person — and one person can only make so many pairs of jeans. I would love to find a way to get more butts in more jeans. And so that’s probably outsourcing production. That would give me more time to spend creating patterns for other-sized women, creating different styles. I would love to make a jacket … and collaborate with other makers. That’s my goal.