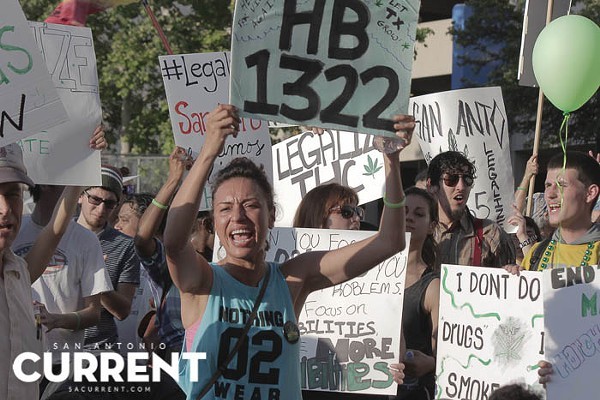 Texas marijuana reform activists are busy balancing a small victory with the passage of a limited medical marijuana bill with major shortcomings in the law, which allows the use of Cannabidiol oils for the treatment of seizures.

But there's another problem — a legal problem.

Heather Fazio, Texas political director for the Marijuana Policy Project, told the San Antonio Current that the bill allows doctors to "prescribe" CBD oil instead of "recommending" the compound.

If a doctor prescribes marijuana, they are breaking federal law. But recommending medical pot is protected as free speech, Fazio explained.

"That's how they do it in 23 states operating with medical marijuana laws," Fazio said. "But it does send a resounding message to the world that Texas acknowledged Cannabis is medicine."

Progress Texas Deputy Director Phillip Martin said in an email that efforts were made to amend the bill to change prescribe to recommend but failed.

"So it's a change we'd have to make in 2017," Martin told the Current. "So if we can make it clear, through advocacy, why we need it fixed during the interim we could get it fixed about the time we'd be ready to go (by the 2017 legislative session)."

The bill still has to go to Governor Greg Abbott's desk where it could be vetoed. Abbott's press office didn't return a call for comment. If Abbott vetoes the bill, it goes back to the Senate for another vote. If a two-thirds "super majority" votes in favor of the bill, the governor's veto is overridden, the San Antonio Express-News reported.

The Senate initially approved the the bill by a 26 to 5 vote — a clear majority.

So it looks like this could really become law, but even then there are implementation challenges, including the legal difference between "prescribe" and "recommend," but also setting up a mechanism to sell the oil, Martin explained.

Looking forward to 2017, Martin said he thinks a bill to decriminalize marijuana that saw record movement this year has a chance of becoming law.

"It's too big a money-saver, it should get out of committee early next year and pass the House," Martin said. "Then it's just up to if the Senate wants to save $700M/year."

Progress Texas may also conduct a study with coalition members like Marijuana Policy Project and Texans for Responsible Marijuana Policy that looks at full-scale medical marijuana, which Martin predicts will dominate the 2017 conversation.

Despite Texas' first medical marijuana bill and what activists say are major shortcomings, it's a real victory.

"The biggest change is that marijuana policy reform is no longer a fringe issue," Martin said. "Can't emphasize enough how important that is for Texas to join this conversation."