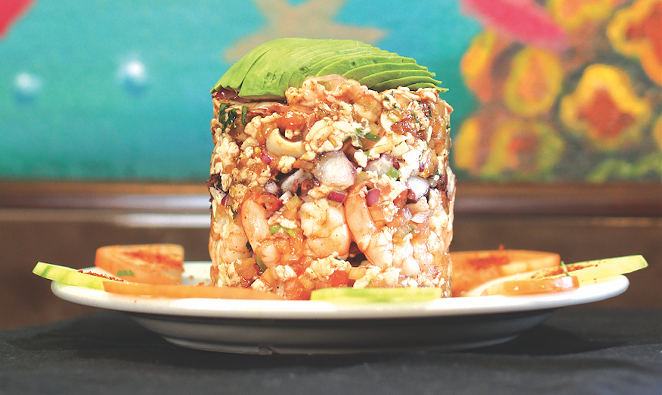 One could even consider it déjà vu as a visit to El Marinero is almost eerily familiar to lunch or dinner any of its predecessors. Built inside a former Pizza Hut, and the former home of sister restaurant Taqueria Chapala Jalisco, El Marinero adds that winning combination of kitschy seafood décor and Sinaloa-style seafood to the Tobin Hill area.

The eatery reflects El Bucanero’s first location at S. W.W. White Road with less then 500-square-feet of dining room lined with sturdy acrylic booths and dotted with four-tops. There isn’t much in the way of a hostess stand, which means diners can seat themselves.

The sense you’ve been here, done that will hit you once more when the menus arrive. Broken up into a list of “traditional” menu items, Mexican-style seafood, camarones (shrimp), caldos calientes (hot soups), pescados (fish), tostadas, ceviches, botanas frescas (platters), cocktails and oysters on the half shell, the menu can be hard to navigate at times (there is no sequence for the numbers), but you get the gist after a serious scan or two. Again, you’ve seen these items before.

It’s hard for El Marinero to distinguish itself from other eateries of its kind, but that’s not entirely a problem for diners. At least it hasn’t been during our visits.

I know to order the fish or shrimp tacos, both piled high with lightly battered seafood, lettuce, tomato and red onions, and the results are straightforward. An order of the ceviche is a must, and here the only discernible difference might be the addition of diced red onion and cucumber, which sometimes find their way into several other menu items.

Order the tostada known as the Torre Imperial for an awe-inspiring stack of seafood that perfectly layers several ceviches, chopped scallops, octopus and peel-and-eat shrimp, and yep, red onion into a colorful tower. Other tostadas feature similar combinations of seafood with a flurry of edible garnishes.

The traditional dishes, essentially a sampling of all things fried, won’t disappoint. The cornmeal breading is light and seasoned well. Used in the mariscadas (you’ve seen this before), the fish and shrimp are perfectly cooked, offering no hint of toughness or rubbery texture.

Though flavors available at El Marinero aren’t necessarily mind-blowing (and how often are we going to restaurants hoping for said experience?), diners will find affordable, familiar dishes and shrimp-topped drinks we’ve come to know and love.