Mark Your Calendar for These Summer Shows-to-see

By a twist of G-funk fate, Warren Griffin III was responsible for introducing the lion's share of LBC's talent to greater Los Angeles and beyond. After playing his tape of 213 — the stacked trio of Warren G and Doggs Snoop and Nate — at a bachelor party hosted by his stepbrother Dr. Dre, the good doctor invited the crew to take a hit of The Chronic. G never joined the powerhouse of Death Row, but he was there for some of G-funk's finest moments, from his "OG gangsta glide" on "Indo Smoke" to the production of Tupac's "Definition of a Thug Nigga." Then, of course, there's "Regulate," a smoky street anthem so synonymous with the era that if you buy a six-four Impala off Craigslist, the seller is morally, if not legally, required to include a copy of the '94 single along with the car's title.

More of a call to action than a concert announcement — although I wouldn't recommend buying tickets just to heckle the Motor City Madman and walking Freudian field day — you can always stand outside the Nuge's bus to catch a glimpse of the loincloth-clad 4X4-version of Trump. Or, try to sneak in with a flask and drink every time Ted does something phallically compensatory. Just take small sips or you're gonna get alcohol poisoning by song two.

It's an unfortunate piece of math that humans can figure out their relative date of conception just by subtracting nine months from their birthday. But, drawing from this equation, I am willing to bet that a disproportionate number of children born in the past 20 years have joined us on Earth about nine months after a Maxwell record dropped. That's a long way to say that the Brooklyn singer makes baby-making music, but we're psyched that Maxwell will debut his first record in seven years, BLACKsummers'night, just weeks before this concert.

In support of the June 17 release of their album, Neko Case, k.d. lang and Laura Veirs will be performing what is sure to be a stellar symposium on how to break hearts via serenade by trio. The avant-artists, each a cyclonic songsmith in her own right, collaborated for over two years on case/lang/veirs, a complementary copy of which will be rewarded with each ticket purchase. 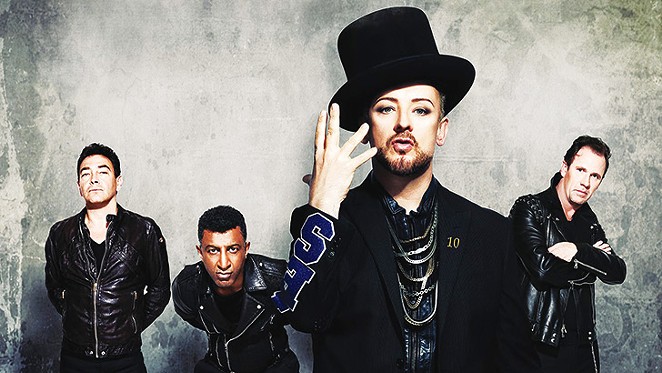 The original lineup of the band and soundtrack to Goddess knows how many distressed individuals looking for solace in Anglo-soul balladry and devil-may-care dance-pop is back together for this two-nighter from the most exclusive of clubs.

A daughter of Oaxaca, Mexico, Lila Downs found herself culturally at-sea in her first years in the States, dying her hair and dropping out of college to follow The Grateful Dead. Thankfully, music brought Downs to her roots; since her 1994 debut Ofrenda, Downs has been a champion of Mexican indigenous cultures, blending the music and language of the Mixtec, Zapotec and Nahuatl peoples with contemporary pop. To celebrate the 25th anniversary of the Guadalupe Dance Company, Downs will join the San Antonio dancers for an evening of colorful and joyous music.

So Biggie's dead, rest his soul, Lil' Kim is doing her best plastic surgery impression of Nicki Minaj's grandma, God bless her, and Ma$e can't decide whether God and/or Michael Jackson* want him to rap or play preacher ... but Bad Boy was the shit, right? Despite not knowing anyone that rocks Sean John, drinks Cîroc or bumps Diddy's latest MMM, Forbes estimates that the mogul formerly known as Puff Daddy, P. Diddy, Puff and Puffy is worth $735 million. That being said, the Family Reunion tour is a twofer: a Lebron-like "Get on my shoulders" for the flailing Bad Boy roster and their Don, and a preview of Diddy's 2016-slated final album No Way Out 2.

Alas, Kraftwerk is one of the great victims of mansplaining — at the bar or in your dad's basement, too many first introductions to the krautrockers have been strained listening parties as a male voice loudly drones on about the band's "seminal" history. But hear this: Kraftwerk is to electronic music what Neil Armstrong is to the moon. Even if you don't like the repetition or machinelike tone (or the tone of voice that introduced you to them), the German outfit were the first to putz around in electronica, getting a foot in the door for everyone who has since picked up a synthesizer in a pop setting. Since a 2012 retrospective at the Museum of Modern Art, the German icons have been in full multimedia regalia, touring an experience of 3D Gesamtkunstwerk — "a total work of art."

Say goodbye to summer with one of the U.S.'s baddest groups of hot-rock, hearing-impairing savants. This show is an SA revelation and should put any doubting mind at ease about the recent Transmission Events fracture and whether Taco City can host indie royalty. To earplug or not to earplug? That is the question.