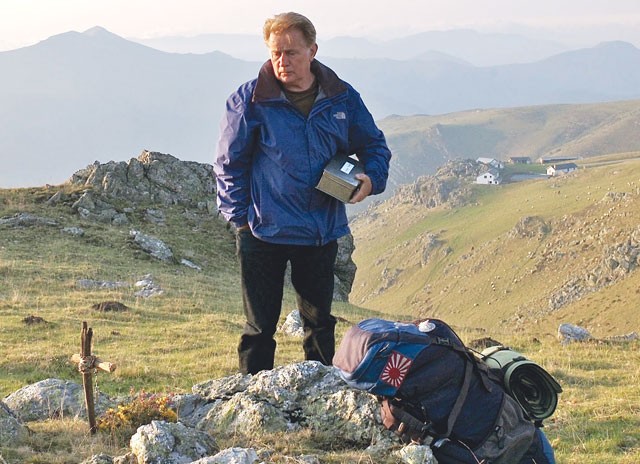 My son is in a class by himself,” actor Martin Sheen (Apocalypse Now, TV’s The West Wing) told the Current during a phone interview when asked how his son, Emilio Estevez, compares to some of the great directors he has worked with during his 50-year career, which include Martin Scorsese, Steven Spielberg, and Francis Ford Coppola. “I adore him and there’s no one I would prefer to work with more.”

Estevez chuckles at the obviously biased albeit endearing admiration of his directorial work, most recently displayed in the moving drama The Way, his fifth feature film behind the camera and third to include his father in the cast. “I didn’t pay him to say that!” Estevez responded.

They’re high praises from a proud papa who first starred in one of his son’s films in the 1996 family melodrama The War at Home, where Sheen played the father of Estevez’ character, a Vietnam veteran suffering from post-traumatic stress disorder. Following War, Sheen was part of the star-studded cast Estevez directed in the fictionalized 2006 Robert F. Kennedy assassination drama Bobby.

In the sincere and self-effacing drama The Way, Sheen plays Thomas Avery, an American ophthalmologist who travels to France after the death of his son Daniel (Estevez) and decides to honor him by completing a pilgrimage (known as the El Camino de Santiago or the Way of St. James), which will lead him to the Cathedral of Santiago de Compostela in northwest Spain. It’s the type of modest journey, Estevez says, he wishes he had time to do more of.

“There is a part of me that still wants to go out and grab a backpack and unplug — not take a cell phone or even a camera and just get out there and experience the world and travel,” Estevez said. “I have yet to do that, but someday I hope.”

Unlike Estevez, Thomas isn’t necessarily lacing up his hiking boots with much eagerness. The Camino is a crusade he is willing to take, however, to feel closer to his son, who had become more distant over the years. As Thomas, Sheen brings richness to the character and his inspired odyssey across Europe. While the open landscape is a major reason the trek feels genuine, it’s Sheen’s ability to provide audiences a reason to care about Thomas and his loss that make the film so convincing. Estevez’ passion for storytelling is also evident, although the script lacks depth in the supporting characters who join Thomas on his road trip.

In The Way, which debuted at the Toronto Film Festival last year and opens in San Antonio this Friday, Estevez and his minimal cast and crew got the opportunity to do some walking on the Camino during production. The road is travelled by tens of thousands each year for various reasons, including paying penance for a crime, for sport, and for spiritual growth. The divine powers of the Camino are something Sheen enthusiastically believes in.

“The whole route is filled with numerous milagros (miracles),” Sheen said. “I experienced some personally, and we experienced them as a community.”

Sheen even includes the making of The Way and the subsequent and expansive media tour across the U.S. as an act of God that has helped spread the faith-based message the film effectively presents.

“We started in San Francisco six weeks ago on a bus and we brought the film all the way across to New York City,” Sheen said. “Who would have believed this idea that began in Emilio’s heart three years ago would be where it is today? The miracles just keep happening.” •