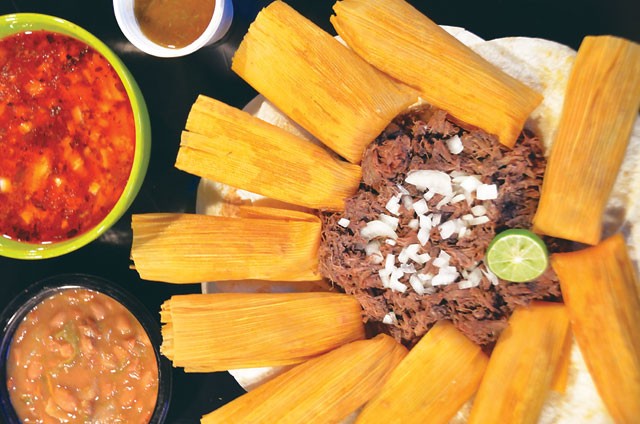 In Britain, "the local" is the neighborhood pub that you know can be relied on; here you might have an ice house or local bar that delivers the same comfort. But for many families, that reassurance is provided on a weekly basis with a trip to the favorite barbacoa shop. Like many establishments that specialize in this traditional fare, the Martínez store on lower Fredericksburg Road is family run (13 years), and closed most days of the week. But while many places only open early Saturday and Sunday, they celebrate a three-day weekend, adding Friday to the mix.

Once made from whole beef heads cooked overnight in a coal-lined pit, Texas barbacoa is a variant on pit-cooked meats held as tradition throughout Mexico and the Caribbean. Acknowledged as the inspiration for barbecue, sheep and goat are the meats of choice further south, while a pork dish — cochinita pibil — is a favorite in the Yucatán Peninsula.

Martínez, like most (all?) commercial establishments in town, uses beef cheeks instead of a whole head. They forego digging a hole in the kitchen, but the process is still slow. The cheeks are steamed for hours, rendering the meat soft; spices are added in the process. But as is traditional, sauces are only added after purchase by the customer.

Though the usual assortment of tacos can be had for immediate gratification, and carnitas, Mexican pastries, along with a half-dozen other specialties are available, we decided to try the gamut of weekend fare to go. Our order filled a not-small box with a pound-plus of "all-meat" barbacoa, a dozen pork tamales, a tub each of menudo and charro beans, and a dozen each of corn and flour tortillas. I know it's tradition, but we passed on the huge bottle of Big Red, and were rewarded with an extra quarter-pound of barbacoa in compensation. An avocado rounded out the order. Asked what "all meat" meant, we were told that slabs of fat were separated from the lean before cooking. "Regular" barbacoa is cooked along with the fat, adding flavor, we're told, and the extra grease drained off after cooking.

We found the meat flavorful, and unlike experiences at some other places, not overly greasy at all. The beans must have been cooked long; the result was a soup with beans so soft, many had disappeared in the broth. But we liked it, indeed, much more than the common offering that sometimes seems like the canned variety —bland. The tacos were low on masa, heavy on pork, not a bad ratio, the masa not dry, but the meat perhaps could have used some more time. My opinion, not shared by my companions, but I'm sticking to it.

I greeted the menudo with trepidation, hearing that Martínez uses regular tripe instead of the soft honeycomb variety I prefer. Some restaurant experiences in town had been unpleasant, providing an over-toothsome bit to chew on. But no problems here they cooked our batch to butter, delivered in a red sauce that didn't disappoint. And our verdict is: overall, Martínez is well worth another visit. As the deluxe version didn't exceed in fat (in our finger-licking estimation) we might risk the notorious regular barbacoa next time, at least in a taco.