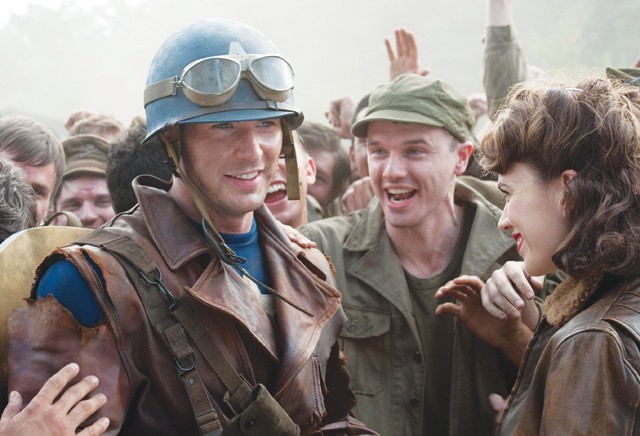 As much as Captain America: The First Avenger wants to look like old fashioned cinema, complete with a clean-cut, “aw shucks” hero going up against a dastardly villain, it eventually proves to be far from the traditional movies it emulates. Most films have a beginning, a middle, and an end (what screenwriters will sometimes refer to as a “story”), and while Captain America successfully begins and middles, the rest of it spins off into something equal parts exciting and frustrating.

But let’s start at the top first. World War II rages in Europe, and slight, sickly orphan Steve Rogers (Evans) is repeatedly rejected for military service due to a weak heart. Rogers makes one last-ditch effort to enlist, catching the eye of Dr. Erskine (Tucci), a German scientist who defected to the U.S. after a run-in with Nazi psychopath Johann Schmidtt/Red Skull (Weaving), disfigured leader of the evil HYDRA organization and the first recipient of Erskine’s “super soldier” formula. Rogers is chosen to be the second, and with the help of a young Howard Stark (Cooper) — who fans of the Iron Man series will recognize as Tony Stark’s dad-to-be — Rogers is transformed from a 98-pound waif to a 220-pound red-white-and-blue badass. (His cat allergy was probably cured, too. Lucky.)

After a brief stint as a costumed mascot selling war bonds, Cap soon takes the fight straight to the Red Skull and HYDRA with the help of formidable, intelligent (but totally pin-up-able) Peggy Carter (Atwell), the gruff Col. Phillips (Jones), his best friend Sgt. Bucky Barnes (Stan), and his international team of (mostly anonymous) Howling Commandos. Lots of shield-throwing and explosions ensue.

Captain America should satisfy the average moviegoer’s desire to see stuff blow up (doubly satisfying when it’s Nazi stuff), but where it really succeeds is capturing the tone of the classic pulp films and comics it borrows from. Director Joe Johnston — who worked on designs and effects for the Star Wars trilogy, Raiders of the Lost Ark, and directed my personal childhood favorite The Rocketeer — totally nails the period while injecting it with just the right amount of comic-book campiness. HYDRA soldiers look like early Imperial Stormtroopers and pilot war machines that look like Panzer tanks crossed with AT-ATs. A motorcycle battle instantly recalled the Endor forest speeder chase in Return of the Jedi. (I even counted at least two Wilhelm Screams.) While the action gets a little repetitive, the movie thankfully takes time-outs from the spectacle to make Rogers a believable, sympathetic character. Evans nails both the soft-spoken, pre-serum Rogers as well as the larger-than-life Cap, and the chaste romance between Rogers and Carter is — unlike most comic-book movies — actually convincing. You will want to root for this guy, and he deserves it.

Of course, this film doesn’t just reference old movies and comics — it’s a crucial stepping stone to next summer’s big superhero event movie, The Avengers. Whereas Thor suffered from having to shoehorn in references to Iron Man and S.H.I.E.L.D. (the superhero spy agency led by Samuel L. Jackson’s Nick Fury), Captain America folds everything in expertly. Example: About a quarter of the way in, Rogers and Bucky attend a science exhibition presided over by a grandstanding Howard Stark, neatly foreshadowing his son Tony’s own showy Stark Expo in Iron Man 2. There are lots of other tips of the hat to the comics that I won’t spoil for fellow True Believers, but it’s genuinely exciting to see the Marvel cinematic universe start to dovetail together.

If Captain America has one big flaw, it’s that it doesn’t so much end as finish up with an abrupt “to be continued.” Yes, Cap’s story will continue in next summer’s The Avengers (stick around for that trailer after the credits roll), but Captain America: The First Avenger should be retitled Captain America: The First Chapter. Comic-book fans may be used to getting their superhero fix in monthly installments, but I need a little more closure in my movies — especially if I have to wait an entire year to see what happens next. Bring on chapter two already.

Note: If possible, skip the 3D presentation of this movie and watch it in good, old-fashioned 2D. Watching the 3D screening at the Santikos Palladium was a terrible experience; the combination of a too-dim screen and the dark, polarized 3D glasses made every scene — even daytime shots — look like they took place at dusk. Nobody wants to see a maroon-gray-and-navy Captain America fight the evil Brown Skull.