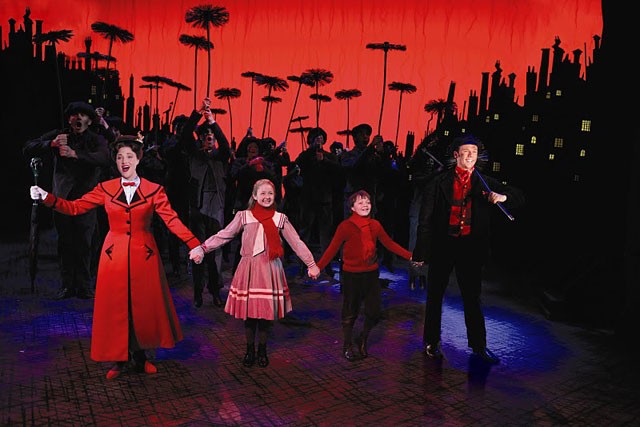 I’m not so proud as to turn up my nose at the obvious wordplay: the touring production of Mary Poppins is, like its titular nanny, practically perfect. Disney obviously has the deep pockets necessary to assemble a superb production team: there’s Sir Richard Eyre, the former head of Britain’s National Theatre, as director; there’s Matthew Bourne — arguably Britain’s finest choreographer — as both co-director and choreographer; and lastly, but certainly not least-ly, there’s award-winning Bob Crowley as costumer and set designer. As visual entertainment, Mary Poppins looks and sounds smashing.

The musical is not, however, a clone of the much-beloved film of 1964. Never a fan of Disney’s movie version, author P. L. Travers insisted that the musical hew more closely to the tenor of her original books; Julian Fellowes was assigned the script. As is clear from his recent work — including the screenplays for Gosford Park and the runaway BBC hit Downton Abbey — Fellowes has a knack for exploring the intricacies and contradictions of the British class system; his Mary Poppins is nothing if not an indictment of middle-class provincialism. Indeed, as a narrative the tale is almost purely didactic. A mysterious and highly symbolic nanny — I mean, c’mon, she’s a celestial Virgin Mary — introduces the sheltered and obnoxious Banks children to the uncomfortably bohemian demimonde of Edwardian London. (Well, this being Disney, it’s more like a hemidemisemimonde, but you get the picture.) So little Jane and Michael finally learn to meet, even to embrace, London’s hard-working lower classes, including the lowly chimney sweeps, bird-feeders, and bakers. At the same time, loan officer Mr. Banks — the symbolism is a bit thick here — must decide whether to lend money to an impossibly optimistic investor (think: Bernard Madoff) or take a gamble on humble factory workers. Will the forces of corruption and class prejudice prevail?

Well, it’s not exactly a nail-biter of a plot, but it hangs together as art: the entire production team is on the same storybook page, and it shows. So Bob Crowley populates his scary, vertiginous take on the Banks’ mighty bank with poor clerks toiling in coattails — and they look exactly like roaches. (This is often management’s view of Labor.) At the same time, Bourne’s lively choreography taps into the gestural vocabulary of the rowdy British music hall; indeed, the conclusion of the novelty number “Supercalifragilisticexpialidocious” drops the subtext entirely and floods the stage with flickering footlights. For a minute or two, every patron at the Majestic is figured as a lower-class Brit, however fancy our Texas duds (and however expensive our Broadway Across America tickets). Even Bert — our genial guide to the world of the chimney sweeps — is pressed into double-duty as a stagehand. There’s no rest, it seems, for the weary.

But this is not Das Kapital: The Musical. Nearly all of the catchy Sherman Brothers' songs remain intact, including the simply wonderful “Jolly Holiday,” which, with its freewheeling chorus of fauns and picnickers, looks a lot like Monet on acid. (Be sure to check out the kelly green Pekingese: an improvement on nature.) “Step in Time,” an extended (and doubtless, exhausting) production number for the chimney sweeps, brings down the house, while wisely eliding the connection between stepping in time and stepping in asbestos. New songs by George Stiles and Anthony Drewe are at best workmanlike, and at their worst slow the momentum; a new ballad for the under-written Mrs. Banks (terribly titled “Being Mrs. Banks”) stops the second act cold. But all is forgiven whenever Rachel Wallace (Mary) and Nicolas Dromard (Bert) are on stage: Wallace is unfailingly pert, crisp, and winsome even when launched skyward like an ICBM missile, while the excellent Dromard reprises his music hall duties from the Broadway production.  There’s also one curiosity for this tour: a re-worked sequence for an army of abused toys — “Playing the Game” — has apparently replaced an earlier, creepier version. (I sort of applaud the idea of a traumatizing Disney musical, but I digress.)

The script’s only major misstep occurs in the last scene, when Mr. Banks discovers the importance — contrary to the entire thrust of the musical — of putting family first. (No: the point is to put society first — as Arthur Miller might say, the chimney sweeps are all his sons.) But that’s just a quibble: for a season-opener, Mary Poppins is like a spoonful of sugar — that helps the trenchant Anglo-centric socio-political commentary go down.