Masters of regionalism at the McNay 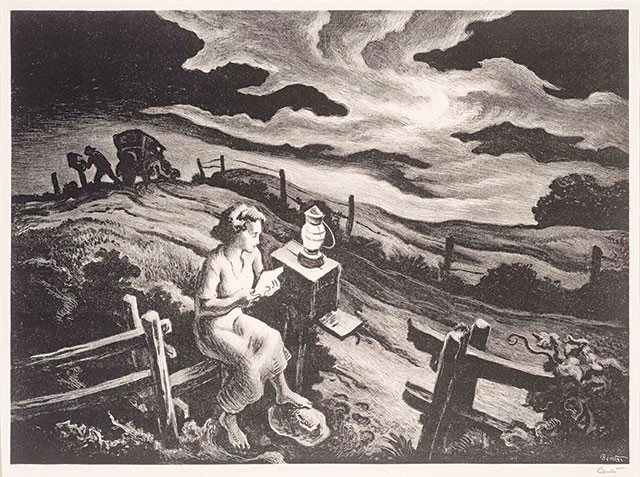 Brash, big-mouthed Thomas Hart Benton railed against the conspiracy of homosexuals he thought controlled the 1930s New York art scene, while Grant Wood was a shy, timid, deeply-closeted gay man who remained true to his rural Iowa roots. Although the pair never met, they are forever linked in the American canon under the rubric of “regionalism,” the art movement launched by a Time magazine cover story published December 24, 1934.

More than any American artist until the advent of Andy Warhol, Benton understood how controversy and media coverage could make his work popular with the masses, though in his later years he observed, “A play was written and a stage erected for us. Grant Wood became the typical Iowa small towner, John Curry the typical Kansas farmer, and I just an Ozark hillbilly. We accepted our roles.”

This is the first time the McNay has displayed all of its Benton prints, and they provide a fine overview of his rollicking style and homespun subjects. Every picture tells a story in Benton’s oeuvre. The most poignant is Letter from Overseas (1943), a farmwoman reading outdoors by lamplight, the menacing clouds symbolizing the turmoil of World War II. Fire in the Barnyard and Threshing celebrate the courage and strength of rural life, but it’s easy to see why American regionalism is often compared to the propagandistic social realism of 1930s Nazi Germany and Stalin’s Soviet Union.

Benton cast himself as the opponent of decadent modernism and the champion of a homegrown American realism, even though he had studied in Paris, flirted with abstraction in his early work, and spent more than 20 years working in his New York studio. His realism looks a lot like late Renaissance European mannerism, populated by elongated figures in rural landscapes that appear to roll and pitch like storm-tossed ocean waves.

After the Time article made him a national celebrity, Benton broke with the East Coast art establishment, bashing the “concentrated flow of aesthetic-minded homosexuals into the various fields of artistic practice,” and lit out for new territory, in his case a teaching position at the Kansas City Art Institute. Once there, however, Benton clashed with Paul Gardner, founding director of the city’s Nelson-Atkins Museum of Art, as well as stuck-in-the-mud faculty members who used the controversy surrounding a notorious nude painting by Benton, Persephone, to get him fired.

The full-length portrait of a voluptuous, topless farmwoman hung for many years in showman Billy Roses’ New York nightclub, but it now has pride of place in a gallery devoted to Benton at the Nelson-Atkins and is generally considered the Mona Lisa of the permanent collection.

Wood also got into trouble for depicting a nude — Sultry Night (1939), a lithograph of a naked, full-frontal, male farmer standing beside a cattle trough and pouring a bucket of water over his head after a long day’s work. The print is one of highlights of the McNay Art Museum’s “The America of Grant Wood and Thomas Hart Benton,” a supplemental exhibit to “Norman Rockwell: Behind the Camera,” opening June 5.

The meticulous craftsmanship Wood brought to all his work is on full display in Sultry Night, which resembles fine-grain pointillism. Thousands of tiny pinprick-size dots are used to build up well-defined blocks of shading in the print, which has the same smooth lines, rounded forms and clean looks of Wood’s paintings. July 15, 1938 is even more typical; the sculpted hillside fields with neat fence lines and formalized trees were derived from the Chinese landscapes decorating plates his mother admired.

Wood also spent time in Europe, primarily studying 16th-century Flemish masters such as Jan van Eyck, whose meticulous realism and bright palette are echoed in Wood’s most famous painting, American Gothic. Scholars, incidentally, are now divided over whether it’s one of the most recognizable symbols of heartland virtue, or a sly, campy satire of American family values.

The America of Grant Wood and Thomas Hart Benton