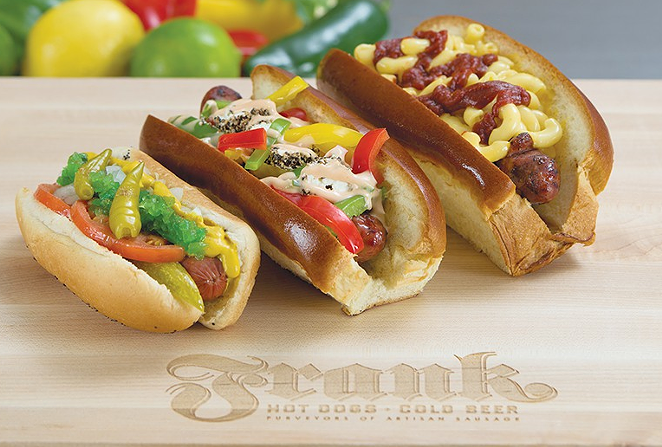 The annual music festival, which is held throughout the La Villita grounds and will feature headliners Public Enemy, the Flaming Lips, The Church, The Drums and more, will now give those that purchase VIP tickets ($95-$169) an opportunity to sample two of the newest contributions to SA's growing foodie scene.

Steve Mahoney, the founder of George's Keep, Blue Box in the Pearl and, most recently, Francis Bogside, has announced his new Izakaya, or Japanese gastropub, Hanzo. The restaurant/bar, located in Lincoln Heights, will use locally sourced ingredients to stock its menu of Japanese fusion dishes.

Complimentary samples of Hanzo fare will be available the first day of the festival, Friday, April 8, from 5-7 p.m. On Saturday, April 9, the long-anticipated Frank Gourmet Hot Dogs will be providing the grub – again, gratis for purchasers of the single or two day VIP passes. (If you do the math here, it really pays to go big, considering the money you'd be spending on food and drinks anyway, just saying).

The long-awaited Frank is already a staple in Austin, providing a venue for dogs, buns and bands at their 4th Street locale in the state's capital. They will be taking over the King William church, previously Casbeers, sometime in February.

The alcohol sponsors for the event will be Shiner, who will also be providing a biergarten for the event, and Deep Eddy Vodka, who will return for the second year in a row.

According to concert promoters, the VIP tickets are almost gone so now is a great time to get them before they disappear along with free weiners, Japanese grub, cold, Texas beer and vodka – the nectar of the gods and calorie counters.