Sound wasn't an issue: The volume of all three stages combined was loud enough to crack the limestone walls and cobblestone roads of the Historic La Villita.

Hip-hop, boiled down, was a reincarnation of the punk movement where pissed off musicians took a stand against injustices through the power of song. Public Enemy is one of the greatest and most important groups to come out of the crusade with their third studio album Fear of a Black Planet functioning as a testimony to the strength of the black community.

Living legend Chuck D took the stage after two warm-up rappers and an inexplicable dancing churro, and that was when the hype got real.
"The whole planet earth belongs to human beings" activist Chuck D said after he brought up enemy No. 1 Donald Trump to a screaming crowd, proud middle fingers in the air as a collective "fuck you" toward the reality star-turned politician.

P.E. delivered the goods as they performed the majority of their bangers with their original lineup, including "Bring the Noise," "Don't Believe the Hype" and set closer "Fight the Power."

Flavor Flav, one of the first - and best - hypemen in music, came bursting out onto the stage, exclaiming his patented catchphrases "Yeah boy" and "Flavor Flav!" The hypeman was the hyped. Flav, due to his success as a reality star in recent memory, has cemented his place as a cult figure in pop culture. Surreal Life, Strange Love, his magnum opus Flavor of Love (it ran for three legendary seasons) and a recent appearance in an ill-fated episode of Celebrity Wife Swap, Flav is the king of guilty pleasures.

The political message of Public Enemy, despite their prominence in the '80s and '90s, is as vital as it was in the Reagan Era due to the inequality still prevalent in American society. The momentum of the Black Lives Matter movement against the modern injustices toward all people of color makes "Fight the Power" just as potent as it was 30 years ago. 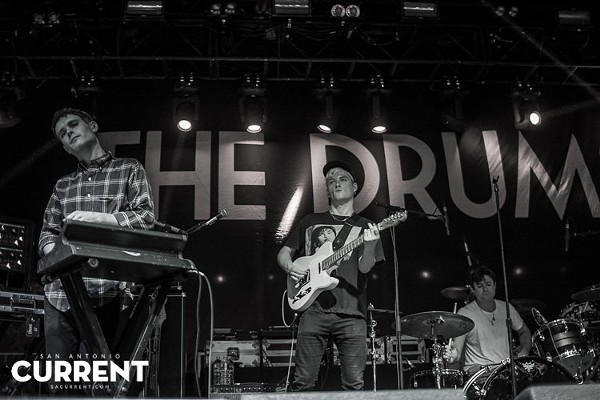 Proving that guitar-driven pop still has some starch left, the Drums are tighter than a, uh, drum. Inspired by (obviously) the Smiths and to a degree, the multi-layered magic of the Beach Boys, the Drums combine dark subject matter like loneliness and death with pop stylings drenched in reverb and jangling guitar, much like their mopey heroes. Sounding like the Beatles dressed as Johnny Cash, the Last Bandoleros are a locally-grown super-group of Texas-sized proportions. Dressed in all black accessorized with bolo ties and bandanas, the Last Bandoleros, like the formerly mentioned Beatles, shared the mic as they harmonized, sang and yowled their way through Americana-infused power pop.