While San Antonio Spurs fans anticipate Game 3 of the Western Conference Semifinals this Friday, there is another date in May that's as predictable as the Silver and Black reaching the postseason and sure to bring certain fans together to celebrate something they love as much as grumpy Gregg Popovich sound bites.

The day is May 4, Star Wars Day. While it might not be as important of a date when comparing it to the milestones on a Star Wars timeline of intergalactic history – the birth of Yoda 900 years before the Battle of Endor or when the Death Star was destroyed by the Rebel Alliance 19 years after the Empire's formation (nerd alert!) – or June 25, 1997, the day the Spurs drafted Tim Duncan No. 1 out of Wake Forest, May 4 has become a popular cinematic celebration for Star Wars aficionados worldwide. May 4 (or May the 4th or May the Fourth), of course, is a pun on the Star Wars phrase that pays: "May the Force be with you." The first official celebration of Star Wars Day was organized by Toronto Underground Cinema in 2011 and included a costume contest and film festival. Since then, the cosmic holiday has spread across the galaxy faster than Kawhi Leonard hyperdriving down the lane for a massive slam dunk. No, really. Last year, astronauts on the International Space Station celebrated Star Wars Day with a screening of Episode IV: A New Hope in Earth's low orbit.

Back down on the rocky terrain of the planet, Star Wars disciples come together on May 4 and do it all. From dressing up as their favorite characters, participating in trivia contests, binge-watching all seven movies (and talking about how they're going to be the first in line to see Rogue One in December), building the Millennium Falcon out of Legos, playing video games, reading comic books and changing all their social media profile pictures to something Star Wars-related, buffs, including those in San Antonio, are ready to keep the fairly new tradition going strong.

It's unfortunate the NBA didn't schedule a Spurs-Thunder game at the AT&T Center on Star Wars Day (the last time they played a playoff game on May 4 was in 2005). Spurs fans who also love Star Wars would've come out in droves wearing Jedi costumes and sporting their favorite unsanctioned Obi-Wan Ginobili T-shirts.

"On May the 4th, we get to share our fandom together," said Apple de la Fuente, founder and CEO of Alamo City Comic Con. "Star Wars is a modern mythology and hardcore fans help grow the universe and expand it. This is our day to celebrate all together that we are one."

Travis Langley, author of Star Wars Psychology: Dark Side of the Mind and professor of psychology at Henderson State University, knows that exact feeling. Although Langley said he was a "lonely little nerd" when the original film hit theaters in 1977 (The 1976-1977 NBA season was the Spurs' first season in the league, just in case you like cool coincidences), the release indicated to him that there were a lot more people who enjoyed the same fantastic things he did. He felt like part of a group.

"Back in '77, Star Wars was a phenomenon that started creating a fan community no one had ever seen before," Langley said. "It draws people together to share something they have in common. May the 4th is not just about loving [Star Wars], it's about feeling connected to other people who are interested in it, too."

There might not be a big Spurs game on May 4, but there are still plenty of local events taking place in celebration of Star Wars Day 2016. So, grab your lightsaber, young Jedi Knight, call up one of your equally geeky friends and an amazing adventure, go out and have. May the Force be with you. And May the Force be with the Spurs!

The popular live music venue on the St. Mary’s Strip opens its doors to all you nerf-herders for some “sci-fi jams” with DJ Smartypants, a costume contest and Star Wars-themed burgers from Attaboy Burgers. Best of San Antonio 2016 winner Doomsday Tattoo will also be on hand giving Star Wars tattoos for $25 in case you’re finally ready to get that Chewbacca portrait inked in your armpit.

If you have 16 hours to spare, make your way to the Downtown concert venue where the entire sci-fi franchise will screen for the most hardcore Star Wars fans. Anyone who sits through all seven episodes will win a special shirt, so you can show your boss why you needed the entire day off. So, what does it actually take to sit through seven films in a row? “Dedication, rest and a heart full of midi-chlorians,” said Joseph Devine, founder of the San Antonio Wookiee Walk. Costumes are encouraged and artists and vendors are welcome.

Slab Cinema sets up their inflatable big screen for a screening of the most recent Star Wars film, The Force Awakens, for stressed-out NVC students studying for finals and everyone else who loves outdoor movies. Come early for a costume contest, trivia contest and to see who can do the best Chewie call. Moviegoers will receive free “lightsabers” and capes while supplies last.


Star Wars on Star Wars Day is too obvious for you? Instead, sit in for a quote-along screening of Mel Brooks’ 1987 spoof starring Bill Pullman, Rick Moranis and the late John Candy. Sponsored by Alamo City Comic Con, the event will include some fun swag: Schwartz rings, combs (“We ain’t found shit!”) and noisemakers. 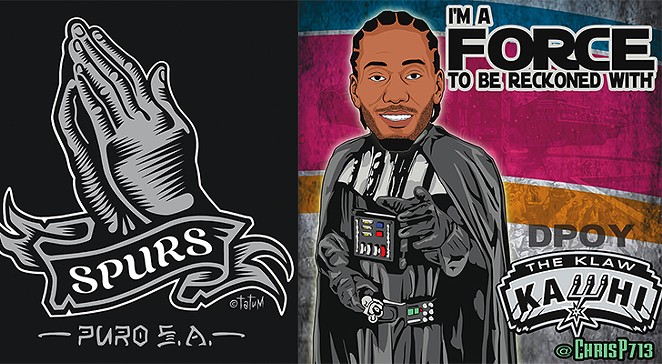 Kids of all ages are invited to a special event that will teach them how to code with the newest Star Wars droid BB-8. There will also be a crafts area to create your own lightsaber, plenty of snacks to keep your energy high as you battle the Empire and some special guest appearances.

Join San Antonio District 1 Councilman Roberto “Han Solo” Treviño as he uses the Force to help show middle school students how important reading, science, math and technology are in today’s world. Along with Star Wars-themed snacks and an arts and crafts area, there will be a special reading courtesy of Bibliotech, activities with the YMCA and a planetarium screening at 7:30 p.m. RSVP at maythe4thsa.eventbrite.com. 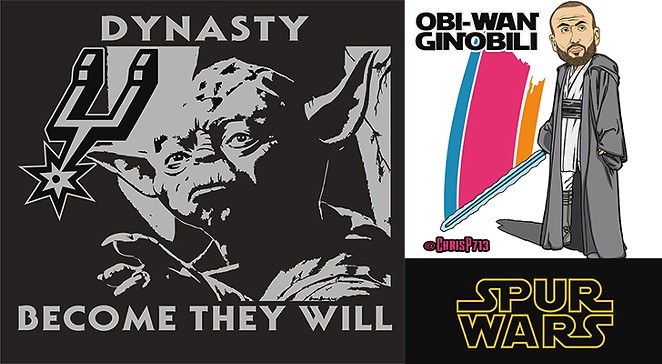 Gamers are encouraged to come out for a demonstration on how to play this miniature war board game set in the Star Wars universe. After training, challenge other players to some space combat. There will also be trivia contests and Star Wars chess. “With the release of [The Force Awakens], Star Wars mania is high, said Debra Castañon, community business development manager for Barnes and Noble. “We have a lot of staff and customers who are huge fans.”

The South San Antonio Chamber of Commerce presents this Star Wars-themed tournament, which includes a silent auction and prizes. Registration is at 11:30 a.m.; Lunch at noon; Shotgun Start at 1 p.m.; Awards and dinner at 5:30 p.m. (dinner only $25). “Of all the Star Wars characters, Hans Solo would be the best golfer,” said Al Arreola Jr., president and CEO of SSACC. “That is, of course, [if] there is no Jedi trickery going on.”

Get hopped up on the craft beer Hop Solo, which will be on tap for what Big Hops is calling “the best party the galaxy has ever seen.” After throwing back a few, restore balance to the Force by playing Star Wars Battlefront on the big screen.

Enjoy an outdoor screening of The Force Awakens. Special Star Wars-themed cocktails will be available for purchase and the best costume will win a special prize.