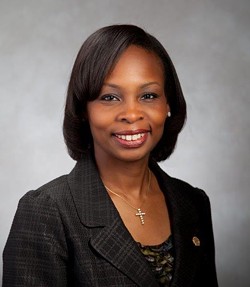 Mayor Ivy Taylor apologized today for calling San Antonio's non-discrimination act, which was amended to include protections for gender identity and sexual orientation, a political stunt.

She made the comments during a KLRN Mayoral Candidate Forum, prompting State Rep. Diego Bernal, who was pivotal in creating the NDO, to tell us via social media that it was a start not a stunt.

Taylor's taken waves of criticism since her comments.

So is this a legit apology?

SAN ANTONIO (April 22, 2015) – “During a meeting with my LGBT advisory committee I came to a new understanding about recent comments I made. I criticized the elected officials involved in promoting the NDO regarding their lack of focus on implementation. My advisory committee alerted me that grassroots activists and community organizers involved in the passage of the ordinance thought I was referring to them. I was not. I appreciate the efforts and involvement of engaged citizens no matter what the cause.

Without informed citizens, democracy is an empty promise rather than a living process. You make us a government for the people and by the people. When you sign a petition or speak at City Hall, you are the voice of the American dream — the idea that all of us are created equal and endowed by our Creator with certain inalienable rights. It was never my intent to insult or demean you, and I am sorry for the pain and confusion my words have caused.

To my advisory committee members Marsha Warren, Ruby Krebs and Robert Salcido, I hope that you will accept my apology. You are models for every resident of San Antonio. You are passionate about your causes, but you are unfailingly courteous and professional in your approach, even to those like myself who sometimes disagree with you. During our meeting yesterday, I felt myself to be among friends who are working toward a common cause, which is the idea that every person should be valued as an individual and as a resource for our community. As we discussed, this feeling is in stark contrast to the insults, abuse and even threats that you and I have suffered as a result of who we are and what we believe in. There is no place for this kind of hatred as we take up the work at hand, the work of building a community that offers opportunity for each of us to live freely, to learn and grow and prosper together.

Each day I pray that the path I have chosen will not lead me away from God and His service. As David prays in Psalm 51, ‘Create in me a pure heart, O God, and renew a steadfast spirit within me.’ (51:10) If you too are working for a better future with a steadfast spirit, I hope that we can work together.”