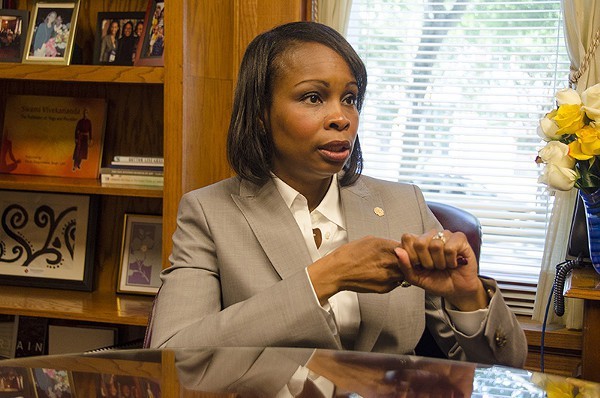 San Antonio Mayor Ivy Taylor will deliver her second State of the City address tomorrow, her first since winning the office in June.

The theme of Taylor's speech will be "A City at Work." It's unclear which topics she'll speak on, although she will likely address the city's progress on ending veteran homelessness, according to the city's Human Services Director Melody Woosley. Her speech last year touted the city's economic growth, while looking forward to the SA Tomorrow comprehensive planning process and expanded workforce development.

Admission to the event costs $40, and must be paid prior to the event (click here to register). San Antonio's admission fee to the luncheon and speech is lower than other major Texas cities'.

The Dallas Regional Chamber charged $60 for members and $120 for nonmembers to get hear Mayor Mike Rawlings' December speech in person. Admission to Houston Mayor Sylvester Turner's first State of the City address this coming April costs $90 for members of the Greater Houston Partnership, and $110 for nonmembers. Both events, like San Antonio's, are luncheons.

Austin Mayor Steve Adler followed a different model for his first State of the City last month. The event was free and open to the public, and held at 7 p.m. There was also free parking at the ZACH Theatre, where the speech was held.

The address and luncheon will take start at noon on Tuesday, March 22 in the Stars at Night Ballroom of the Henry B. Gonzalez Convention Center (900 E. Market St.). It will also be livestreamed and archived at NowCastSA.

Ivy Taylor State of the City