Originally published in Out in SA.

Pride Center San Antonio announced today that San Antonio Mayor Ivy R. Taylor will join members of the LGBT and allied community for a candlelight vigil on June 16 in honor of the victims of the Orlando shooting.

According to a press release, the event, which is being organized by Pride Center San Antonio, will include speakers from “other marginalized communities, the Muslim Children Education and Civic Center, Temple Beth-El, along with other interfaith leaders and social justice organizations . . .”

District 1 City Councilman Roberto Carlos Trevino and Kiran Bains, director of the Office of Diversity and Inclusion are also on the roster of speakers.

The event marks the first time in her civic career, either as a city councilwoman or as mayor, that Taylor will participate officially in an LGBT event.

In 2013, Taylor was one of three city council members who voted against the nondiscrimination ordinance angrily saying, “I have sacrificed a lot to serve in this role on city council, but I will not sacrifice my core values and religious beliefs for political gain or to be in alignment with a particular platform.”

In 2015 interview, Taylor told the San Antonio Current, “I think people nowadays expect political correctness, and that is very frustrating to me. I had been told that, ‘You’re black, it would look bad for you if you don’t vote this way.’ And I didn’t like that at all. This is supposed to be nonpartisan government, right?”

As a result of those incidents and others, Taylor’s relationship with the LGBT community has been strained at best. However, since becoming mayor she has created the city’s Department of Diversity and Inclusion and appointed a mayoral LGBT advisory committee. She has, however, expressed opposition to a citywide employment nondiscrimination policy. 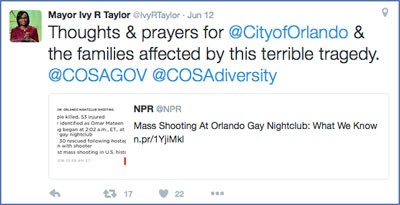 Taylor’s appearance at the vigil may mark a turning point in her relationship with the LGBT community.

On the day of the Orlando shootings, Taylor responded by tweeting: “Thoughts & prayers for @CityofOrlando and the families affected by this terrible tragedy. @COSAGOV @COSAdiversity”