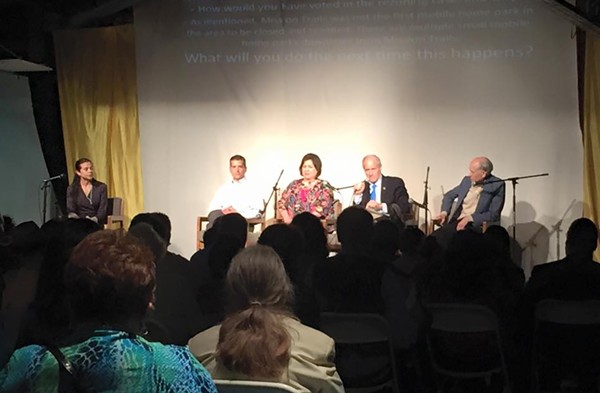 During a tough-hitting hour of well-composed questions, candidates sparred over Mission Trails, the Hays Street Bridge restoration project and the Alamo Beer Company, gentrification in Beacon Hill and the demolition of Univision's original headquarters.

Both Villarreal and Van de Putte said they would have voted against rezoning Mission Trails mobile home park. Last May, the city voted to rezone the trailer park making way for a $75 million luxury complex that resulted in the displacement of roughly 300 people.

Adkisson didn't answer the question, but said he would have put his thumb down on developers before the vote and would do the same in related instances. Smith also did not answer the question or even address the topic, just saying that better communication is needed.

Villarreal added that he would create a fund for people displaced through development and Van de Putte criticized the Mayor's Task Force For Preserving Dynamic & Diverse neighborhoods.

The forum really heated up when the moderator asked the candidates about the Hays Street Bridge restoration project and the Alamo Beer Company, which protestors say was promised as a public space.

When the brewery held a ribbon cutting last December, protestors stood on the Hays Street Bridge shouting and chanting in order to disrupt the ceremony. The group says the city gave public land to a private developer and a judge agreed, but the city sold the land to the brewery anyway.

After Van de Putte told the crowd at Esperanza that citizens should not have to sue local government to force it to do what is right, Villarreal pointed out that she chastised protestors during the ribbon cutting.

Van de Putte defended the day, saying protestors had no right to disrupt the Pledge of Allegiance, to which Itza Carbajal, a protestor who was at the bridge, said was not accurate.

Like most forums, the candidates didn't answer all the questions and eventually — between Van de Putte and Villarreal — the debate became personal.

Villarreal attacked Van de Putte over the 2013 Hemisphere Park Bill, which allowed for development without a vote. The bill caused friction between the two because Villarreal said Van de Putte bowed to developers.

The topic incensed Van de Putte who said her grandson died while the bill was being debated and voted on. She said she missed the final vote because she was with family. Villarreal later said he did not criticize Van de Putte for missing the vote, only for changes she made to the bill.

Editor's Note: In a phone call after the forum, Villarreal clarified that he did not criticize Van de Putte for missing the vote, only for changes to the bill that allowed more private development. The above paragraph has been updated to reflect his statement.

As for how to mitigate gentrification and protect displaced people, Villarreal floated a few ideas, including a fund to help displaced people and providing low- to no-interest loans to help people whose home's have fallen into disrepair bring them up to code so the property isn't demolished and sold to a developer.

Van de Putte showed empathy to people effected by gentrification and criticized the city for its past handling of Mission Trails while Adkisson said he's the right candidate to make sure the city isn't bowing to developers at the expense of longtime residents.

Here's a compilation of tweets from the event compiled by the Esperanza Peace & Justice Center.