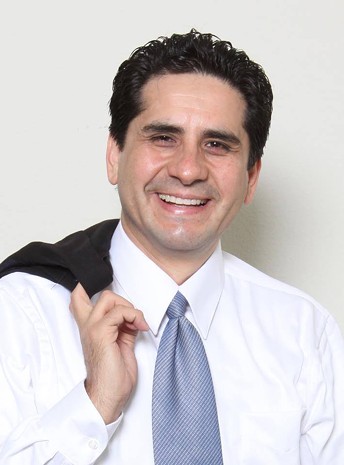 That's because of Chasnoff's column last week reporting that, despite Medina saying he's lived in the United States ever since he immigrated from Mexico at age 3 with his mother, public records show he worked at a Mexican university from 1997 to 2008, was divorced and married in Mexico, and even ran for public office in the country as recently as 2005.

The column, as you'd expect, did not go over well with the Medina camp. So on Monday, he gathered a group of a few dozen supporters to rally outside the daily's downtown building. After leading with the pledge of allegiance and calling himself "a proud American from the United States of America," Medina and his supporters proceeded to get very, publicly angry at the Express-News for reporting things.

"I will not tolerate the Express-News publishing this type of rhetoric, especially when it has negative effects on our children, our families and our city," Medina shouted as supporters chimed in with words like "racist" and "bigot."

Medina contends Chasnoff's column demonized naturalized citizens in order to "score political points." In case you hit the paywall, here's what a rundown of what the column actually reported:

- A Mexican social security statement shows Medina working at Universidad Autonoma de Coahuila in Torreón, his father's home, from 1997 to 2008, earning some 225 pesos (or, going by today's exchange rate, about $12) a day. Medina told Chasnoff he was living in Texas and just working for the Mexican university as an occasional "visiting professor, administrative aide and study abroad proponent."
- Records also show that in 2005, Medina ran what was basically a Mexican state legislative seat as a member of the Institutional Revolutionary Party, or PRI, in Torreón. He lost by about 1,200 votes. Medina's explanation is that he was living in Texas but simply ran for public office in Mexico to "expand my political consulting business" into another country — which, while it may seem a little gauche, is not exactly unheard of.
- Again, according to public records, Medina divorced his first wife in Torreón in late 2006 and then remarried in Torreón nine days later.
- Medina became a naturalized U.S. citizen in 2009.

None of this is necessarily campaign-tanking info for Medina's campaign, just the standard what-you-probably-didn't-know-about-this-guy kind of stuff that precedes virtually every big political race. It's what Medina appears to have left out of his official bio on the stump. Or, as Chasnoff wrote in his column: "Whether Medina lived in Mexico as an adult is not a campaign issue in itself. The question with bearing on the race is whether Medina is being honest with voters about his continuous residence here."

For Medina and his supporters, however, the whole column was a slight against naturalized citizens ("I will not accept them minimizing me because I am not a natural born citizen," Medina declared on Monday). Medina also compared Chasnoff to radio shock jock Don Imus, who in 2007 lost his CBS perch after calling the Rutgers women's basketball team a bunch of "nappy-headed hoes" on the air.

Soon after Chasnoff and fellow E-N writer Josh Baugh came out of the building, Medina told reporters that he was "ready to meet them with the challenge," whatever that means. He turned his back on the guys and didn't voice an answer to their single persistent question: What was inaccurate about our story?

Here's a video of the protest Medina's campaign posted to his FB page: