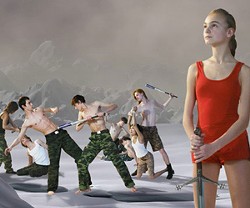 
The rise of social and participatory media is but one of the topics Dr. Christiane Paul will cover in her lecture “Media Art Politics,” an exploration of the contemporary media landscape. As examples, Paul, an adjunct curator of New Media Arts at the Whitney Museum of American Art, will focus on artworks that deal with political and social conditions. Among these works is “Last Riot, 2007” an arresting three-channel video by the Moscow-based collective AES+F (Tatiana Arzamasova, Lev Evzovich, Evgeny Svyatsky, and Vladimir Fridkis). In the video, which layers live action with computer animation, raptors circle, a volcano erupts, missiles launch, and fashionably dressed androgynous teens simulate battle with baseball bats, golf clubs, and swords in what appears to be a stylized game of Armageddon. Free, 7pm, McAllister Auditorium, San Antonio College, 1300 San Pedro, (210) 486-0000, alamo.edu/sac.