Medicaid expansion for uninsured Texans had bipartisan support, but lawmakers won't pass it this session 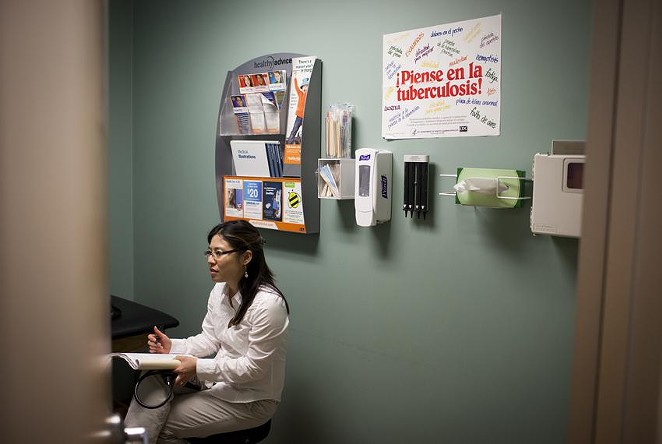 An effort to expand government health care for working poor Texans is likely dead for this legislative session, supporters say — mired in conservative opposition and faced with a fast-approaching deadline in the Republican-led Texas Legislature.

Medicaid expansion “appears extremely unlikely to move this session,” said state Sen. Nathan Johnson, D-Dallas, author of Senate Bill 117, a plan that had bipartisan support among House members but not in his own chamber. “It appears that for purposes of this session, lingering misinformation and political intransigence are still too large to overcome.”

Its demise means the state leaves on the table billions of dollars in federal incentives that supporters say would not only pay for the expansion but add money to state coffers and lower costs for hospitals that care for large numbers of uninsured patients.

Texas has the largest number of uninsured residents in the nation, many of them working adults who can’t afford private or subsidized insurance but don’t qualify for Medicaid because they earn too much. Roughly 20% of the state’s population lacks health insurance — a number health officials say has grown since more than a million Texans lost jobs and, in many cases, health coverage because of the COVID-19 pandemic.

Committee chairs in both the House and Senate have blocked bills from getting hearings, effectively running down the clock with only three weeks left in the session.

Opponents of expanding Medicaid to an estimated 1.4 million adult Texans who would qualify under the Affordable Care Act of 2010 argue that the program is poorly managed and financially unsustainable, and that expansion encourages government dependence, delivers poor health outcomes, and crowds out children and people with disabilities who need it the most.

“The new reality is that Medicaid expansion isn’t just dead for now, it should be dead-dead,” said David Balat, director of the Right on Healthcare initiative at the conservative Texas Public Policy Foundation. “There’s no longer any rational justification for expanding Medicaid to help the uninsured.”

Some 4.2 million people are on Medicaid in Texas — including more than 3 million children. The rest of the recipients are people with disabilities, pregnant women and parents living below 14% of the federal poverty level, or about $300 per month for a family of four.

Adults with no disabilities or dependent children don’t qualify for Medicaid, and the vast majority of children on Medicaid have parents who do not qualify.

The ACA allows states to expand that threshold to 138% of the poverty level, or $3,000 per month for a family of four. Texas is one of 12 states that have opted not to expand their Medicaid programs under the law.

Johnson’s bill and its companion in the House, House Bill 3871 by state Rep. Julie Johnson, D-Dallas, created a “Live Well Texas” program that envisioned a “unique to Texas” approach to expanding Medicaid, and included incentives for adults to work and manage their own health care responsibly.

Those points answered the concerns of a handful of House Republicans who joined Rep. Johnson on her bill, and the legislation had enough support to pass the House floor had it gotten there. It also had the backing of nearly 200 business groups, health care organizations and local government entities.

Nothing is truly dead until the Texas Legislature adjourns on May 31, and lawmakers often file last-minute amendments and emergency legislation to push through priority or time-sensitive measures.

But supporters’ hopes have dimmed, even though two recent polls show that 70% of Texans support Medicaid expansion.

“The chasm between Texans and their elected officials has never been more stark,” said Patrick Bresette, executive director of the Children's Defense Fund-Texas. “The failure to so much as give that bill a hearing shows the dangerous disconnection between state leaders and their constituents."

A brief and broadly worded amendment to the House budget last month sought to reduce the number of uninsured Texans by opening the door to Medicaid expansion or other programs, but it failed along party lines.

The only hope left, supporters say, would be if Gov. Greg Abbott, Lt. Gov. Dan Patrick and House Speaker Dade Phelan were to lead the charge to push through legislation.

That’s also unlikely, as none of the state’s top three Republicans has professed support for expanding Medicaid, and their conservative base has been resisting it since the U.S. Supreme Court made it optional for states in 2012; it had been mandatory under the ACA until that provision was challenged in court.

“It’s clear that if Governor Abbott, Lt. Governor Patrick, and Speaker Phelan chose to let Medicaid expansion bills be heard in committee and voted on the floor, that a substantial majority of Texans would applaud that,” said Anne Dunkelberg, associate director at the left-leaning think tank Every Texan. “And if the leaders want to, it could still happen this session. It’s important to not describe legislative outcomes as though they result from a magic black box for whom no one is accountable.”

Instead, state leaders have supported a package of bipartisan bills called “Healthy Families, Healthy Texas” that they argue will help all Texans gain better access to health care.

They include measures to reduce the cost of some prescription drugs, ease continuity of Medicaid coverage for children, require transparency in medical billing, expand availability of telehealth and broadband services, expand Medicaid coverage for new mothers and increase insurance plan options through small businesses, agricultural nonprofits and associations, among others.

“Opposing Medicaid expansion is not just as simple as opposing big government or more spending,” Balat said. “It’s the first step in refusing to double down on a decade of failed health care policy, and forging a new, better path.”

It is unclear how long the Biden incentives will be on the table, supporters of Medicaid expansion say, and there is also the uncertain future of the 1115 waiver, a temporary agreement to reimburse hospitals for uncompensated health care costs. It was meant to help Texas transition to Medicaid expansion before the state chose not to do it.

The waiver is set to expire in 18 months if Texas can’t convince federal health officials to extend it.

Those developments, along with the health care inequities that were laid bare and made worse by the pandemic, give expansion supporters confidence that they can eventually convince Texas leaders to expand Medicaid for some of Texas’ more than 5 million uninsured residents.

Disclosure: Every Texan and the Texas Public Policy Foundation have been financial supporters of The Texas Tribune, a nonprofit, nonpartisan news organization that is funded in part by donations from members, foundations and corporate sponsors. Financial supporters play no role in the Tribune's journalism. Find a complete list of them here.