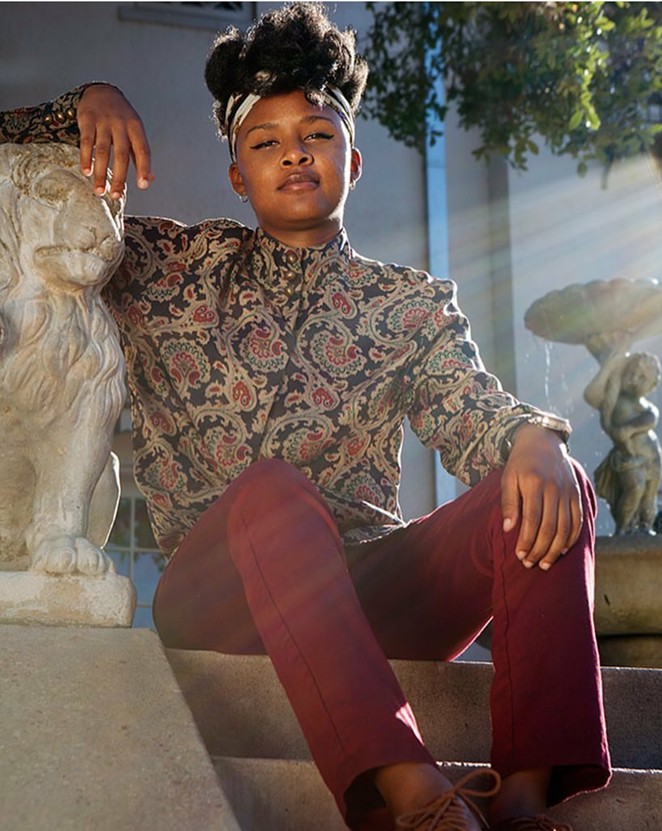 You know that feeling you get when you discover music that’s so good you’re torn between either jumping on Facebook to share your found treasure or keeping it to yourself like you’re Gollum from The Lord of The Rings whispering “my preciousss”?


Amea, which is an acronym for the full name Ayanna Moriah-Eliza Allen, released a six-track EP called Baggage Claim last year and has basically produced those complex aforementioned feelings inside me. For only having three actual songs to listen to on this collection of music (the other three are a skit, intro, and outro) the 24-year-old R&B singer proves that three songs is all she needs to let you know that she’s made of magic.


Born in Oklahoma, Amea grew up in Ohio but eventually moved to Plano, Texas where she graduated high school. The singer told the Current she got her taste for performing through singing in church and playing violin and snare drum in school before moving to San Antonio in 2013 to attend UTSA. Now in a graduate program studying sociology, Amea has been breaking into the regional music scene with a sprinkling of local shows as well as two official South By Southwest showcases this past March.


Even though Baggage Claim came out almost a year ago, the rich quality of the engineering combined with Amea's lush vocals make for a blend of R&B that doesn’t sound like it’s local at all. If any of the tracks showed up on the radio next to artists like Kehlani or J. Cole, the stuff Amea's putting out would hold up. Maybe that sounds like a stretch to you, but that's what happens when your EP is produced by former WZKD and Milli Mars collaborator CJ Stephens, who for the last few years has been a professional songwriter and producer for Sony/ATV publishing.

“I went to her (Amea's) Soundcloud and said who the hell is this,” Stephens tells the Current. He says that once he found Amea's music, he couldn’t stop listening to it and eventually contacted the singer to collaborate.


From the bounciness of “Foolish” to the chilled out “High” (which is the perfect track to add to your road trip mix, btw), Allen’s vocal performance throughout Baggage Claim is nothing short of remarkable. With an upcoming show at Paper Tiger with “Selfish” singer PNB Rock, a tour to kick off in July and more music in the works, Amea might end up being your new favorite R&B singer sooner than you think.