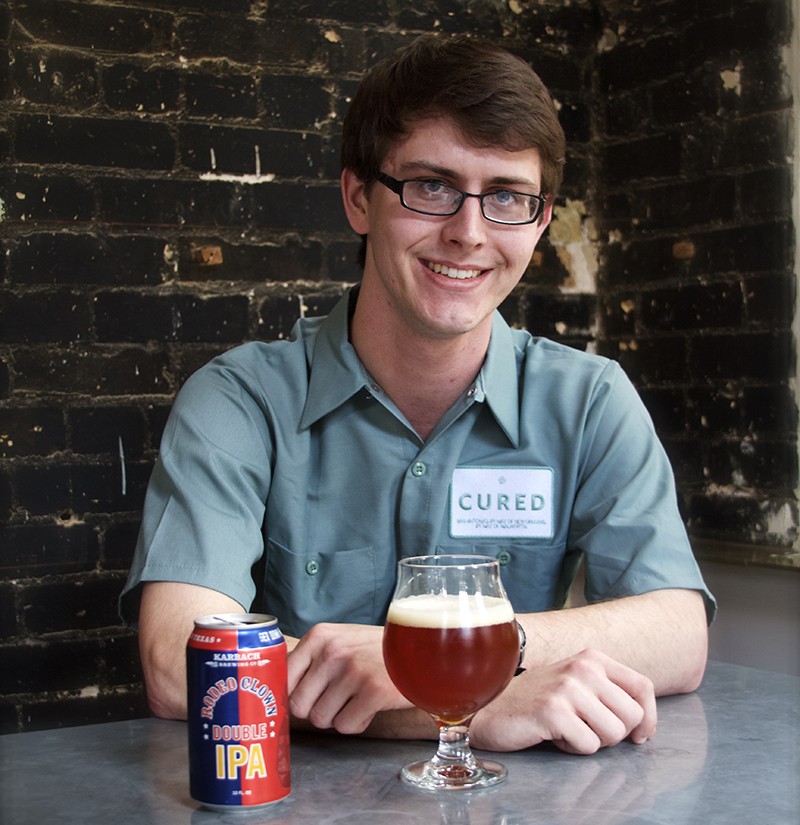 Beer drinkers, listen up: There's a new cicerone in town. And no, he doesn't have the (apparently) prerequisite beard. Forrest Hyde, a 25-year-old Alabama transplant, became the sixth certified brew nerd in the city this spring and beer lovers in the area can tap into his trove of knowledge at Cured.

Though he's played the role of lead server and bartender since the Steve McHugh-owned restaurant opened in late 2013, Hyde, an avid runner, only recently took on his latest role of Certified Cicerone.

"From my history, from Lüke and coming here, I've always had such a strong focus on beer, and I've always been, in my own little world, kind of the expert when it came to beer," McHugh said. The Wisconsin native, who makes a point of attending Denver's Great American Beer Festival every year, found a kindred spirit in Hyde, an Alabama native.

"We would get new beer samples and [general manager] Robert [Rodriguez] would suggest I let Forrest try it. We would sit down and he's pulling out all kinds of stuff," McHugh said of Hyde's sensitive palate — he's picked up notes of bananas and almonds before the chef.

Hyde earned his bachelor's in English Literature at the University of the South in Tennessee. He later made his way to San Antonio for a job (and purchased a homebrew kit with his first paycheck), but found a home at Cured. Once Rodriguez and McHugh discovered Hyde's powerful palate, and his earnest passion for brewing and all things beer, they decided to invest in the future.

The trio began Hyde's process of becoming a Certified Cicerone. The program starts off with beer server certification, which can be completed online. To gain Certified Cicerone status, individuals must pass a written exam, tasting and demonstration with an 80 percent grade overall and at least 70 percent in the tasting portion, according to the cicerone.org. Exams, which cost $395, are scheduled throughout the country, with retakes coming in at $100 and $175.

He almost didn't pass the test because he didn't' have a beard," McHugh joked.

To prepare for the exam, the lithe Hyde tasted between 100 and 150 beers in two and a half months. Combined with an intense reading list and a handful of tasting seminars at local breweries, studying took the bulk of his time. But at least there was beer to sample.

The other characteristic that sets him apart from the five other cicerones in town (he joins Alex Rattray of The Granary 'Cue & Brew, Derek Lutz and Rebecca Roppolo of Whole Foods Market, Brian Tarver of HEB and Austin Tipps of The Boston Beer Company) is his proximity to an audience.

"He's not some stuck-up beer master who's in a brewery all day ... This guy has to deal with people. It's what we want as business owners, to have smart, knowledgeable people," McHugh said.

Hyde has to translate his knowledge into digestible bits of information when describing beers to restaurant guests, but he uses the kitchen's ever-rotating menu to help him along. Hyde dishes his recommendations based on what's on your plate.

"Pairing food with the beers is a wonderful experience to share with somebody... to be able to combine those flavors together for somebody and help awaken a part of their palate they might not have tasted before," Hyde said.

Rodriguez added: "It's not just pairing to specific things, it's understanding the underlying flavor profile. You have basic notes in the beers, and he knows what direction to go in a menu that changes very frequently. He's able to make those decisions on the fly, but he's also very studious and very meticulous whether he's talking about percentages of ABV or bitterness scale, he's able to speak to the staff with a lot of knowledge."

Since Hyde's taken over the beer menu at Cured, which was formerly the chef's baby, we're seeing an increase in IPAs, but he's not adding beers willy-nilly. Another goal of his is to add more local products to the lineup, such as beer from Boerne Brewing Company and bombers from San Antonio's Freetail Brewing and Branchline Brewing.

"I love seeing people get to enjoy something that was brewed only a couple miles a way," Hyde said.

As to what he's drinking? You can take the boy out of Alabama, but the brews of his home state are what he's sipping these days.