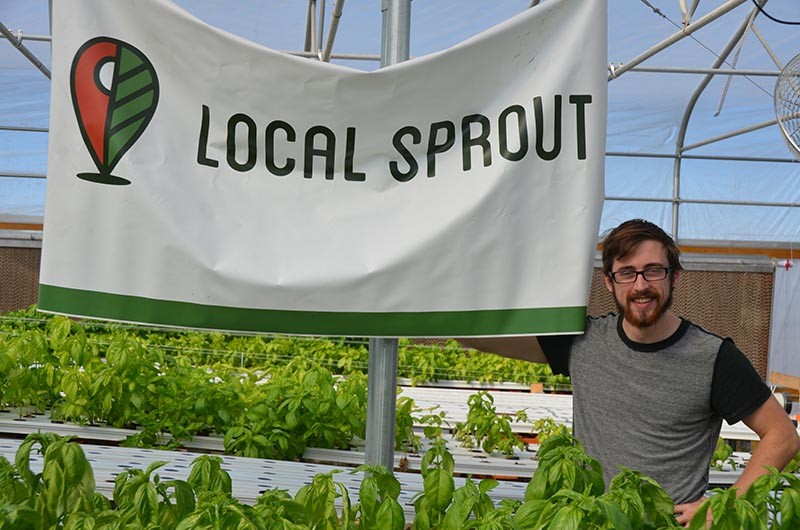 In an entrepreneur's uniform of jeans, T-shirt and slipshod beard, LocalSprout co-founder Mitch Hagney walks me into his warehouse on the grounds of the San Antonio Food Bank. The sartorial choice works for his upstart business sense and for the business at hand—the warehouse is actually a greenhouse, one of two locations where LocalSprout grows veggies to sell to San Antonio restaurants.

Inside, fans cut through the humid air where neat rows of basil grow a few feet off the ground. Stacked on wooden crates borrowed from the food bank, the plants are hooked up through PVC pipes to an in-house rig providing a lifeline of water and nutrients. LocalSprout operates entirely on hydroponics—no soil allowed. The company hopes that this soilless tech popular with NASA scientists and industrious stoners can increase opportunities for urban farming in SA.

LocalSprout began in 2013, when Hagney found an interested investor in RackSpace co-founder Pat Condon. "I had just graduated from Trinity and I knew that I wanted to go into hydroponics because I think it's a version of agriculture that's sustainable," says Hagney. "I had talked about it a lot in San Antonio and Pat found out about me and had the interest in the industry so he called me and asked if we could partner up."

Their first venture took root on the East Side, where LocalSprout purchased a smart-farm hydroponic shipping container from Freight Farms out of Boston. "We were the second customer in the country for them," says Hagney. "The equipment was not streamlined, necessarily." With their Instagram-cute freight tucked in an unused warehouse, the pair began to grow inside, every day of the year.

Divorced from sunlight in the storage container, the plants get energy from purple-hued LEDs. Not only are the bulbs energy efficient, grow-light LEDs cater to the wavelengths of light that plants need most, explaining the violet hue. With such an acute level of control over their plants, Hagney and Condon's greens are impressive in size, taste and texture. On offer at Barbaro and One Lucky Duck, their kale is surprisingly tender, a quality atypical of a cranky vegetable notorious for needing massages.

But with control over all farming variables, LocalSprout falls harder when a mistake is made. "If our pumps fail, our plants die the next day," says Hagney. "If our nutrient solution goes out of whack for three days at a time, our plants look bad. Whereas natural farmers just put the seed in the ground, water it and hope for the best, we have a better option because we can produce better plants. But if we mess something up our plants are much worse than they would have been in the field."

With the first crops, Hagney was unsure how to get LocalSprout into the marketplace, though the problem didn't hang around. "Local farming is something everyone seems to want," says Hagney. "So it wasn't too hard finding opportunities to sell." First on sale with juice bars like One Lucky Duck and Urth, you can now find their Thai basil in Tuk Tuk Taproom's red chili curry or The Brooklynite's Love Beat gin cocktail; their Genovese basil in Humble House Foods' pesto; or their Green Afro kale in Barbaro's grape and gorgonzola salad.

The direct-to-consumer market has been a little more difficult to tap, though Hagney mentioned plans of LocalSprout crashing some future farmer's markets. "It's been tough to have people call you and say, 'I want three dollars worth of kale, can you arrange to meet me at 3:30?'" says Hagney. "That's not super sustainable."

Though direct-to-consumer sales and supply growth poise issues for LocalSprout, Hagney speaks with the shatterproof language of a start-up junkie. Certainly, the little company has all the contemporary start-up essentials checked off. There's the portmanteau name—one word, with a capital letter separating the two ideas. There's the charming, clean design of the logo—half leaf, half 'Current Location' map marker. And, of course, there's the altruistic vision. In his monologue from last year's TEDxSanAntonio, Hagney spoke confidently about hydroponics and the future of urban farming. In the 10-minute talk, he's conversational and collected, if only as a front.

"I kept on going outside to call somebody, but I was just giving the speech into my phone for practice," he admits.

It's been an exciting 18 months for Hagney, the farming autodidact. He studied communications in school and learned hydroponic basics over summers and on personal projects to get into a field with fulfilling benefits. "I feel validated that I can help solve a problem I'm working on," he says. "I wake up, grow something and sell it. I feel better 'cause I didn't use any pesticides, I didn't use any herbicides. You can eat the tangible difference."