Meet the Brains Behind This Year's Fiesta Cornyation Throne 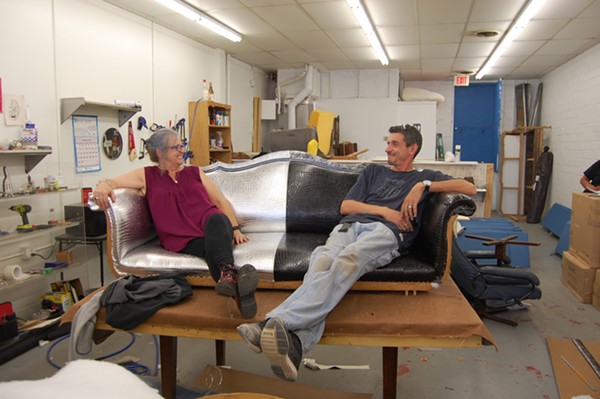 Two month’s shy of the one-year anniversary of the Supreme Court ruling that same-sex couples do indeed have a Constitutional right to marry, Cornyation will make some history of its own.

Wayne Beers and Michael Bobo, proprietors of W.D. Deli (3123 Broadway), will both serve as Kings Anchovy LI, a first for Fiesta Cornyation, which celebrates its 50th anniversary this year. Beers and Bobo married in New York City in 2011.

And they’ll have a double-seated silver-and-black throne fit for the occasion.
Lee Williams, a self-described apprentice upholsterer with two decades of experience, who was busy working at European Artisan Upholstery just north of Downtown on McCullough this month, says the throne is made from a frame he picked four years ago when he first moved to town from sunny southern Spain.

“I sanded it down thinking I’d stain it nice, but now I’ve ended up painting it,” Williams, a native of England, said with a laugh.

He started learning his craft in Trent, England, working under several upholsterers, and splashes of Williams’ work can be seen around San Antonio, from Hot Joy to Sam’s Burger Joint.

At the time of this writing, the throne’s glittery legs lay off to the side. Williams was finishing off the back of the throne, which is covered in crocodile leather. And the piece will be fitted with crystal studs.

While Williams creates all sorts of wonders — like a vegan chair for Blue Star and a tuxedo chair that’s just what you might think — being commissioned to be the creative mind behind the Fiesta Cornyation throne is a first.

“We’ve never been commissioned by a king,” Arecchi remarked.

The duo hopes the throne will be auctioned off for charity, which is appropriate considering Cornyation’s contributions to the community over the years.

In 2015, a record $200,000 was awarded to the San Antonio Aids Foundation, the Black Effort Against the Threat (“BEAT”) AIDS and four Robert Rehm scholarships, Out In SA reported last June.

And if the throne is auctioned off, rest assured, it will last for life.

“I fix things like I would put them in my house, or the Queens,” Williams says, with a flash of a smile.

Cornyation is April 19 through 21 at the Empire Theater.