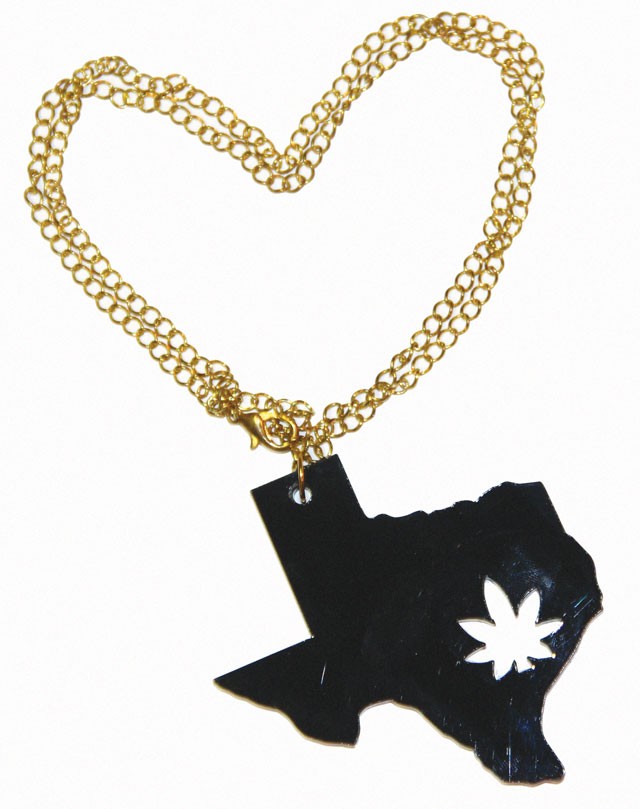 Chronically Cute, by Devyn Gonzalez, is a marijuana-celebrating home décor and jewelry line made in San Antonio. Weed-leaf cushions, hand-knitted bong cozys, and “’stache” jars are just the beginning of Gonzalez’ vision of 420 crafts.

I’ve always done knitting and felt work, and I like weed. There’s nothing like this out there for girls — except for, you know, bikini babes for guys with grills. The people who buy my stuff are very normal regular people, lots of moms who you wouldn’t even guess like to smoke.

Right now the attitudes about marijuana are a grey area, so I’m trying to just make everything cute and girly. I’m trying to change the face of the culture — I’m very non-threatening. I’m a mom; I’m a member of the PTA; I don’t want to feel like a criminal. Willie Nelson and Martha Stewart are my biggest inspirations.

My best friend died of scleroderma in April of this year, and before she died she was like a mummy — she couldn’t eat, she couldn’t move, and painkillers made her condition worse. All she wanted was to be able to use marijuana legally. That’s why 20 percent of the Chronically Cute proceeds go to the medical marijuana efforts in Texas.

Alamo Wasteland, aka “teenage tranny witches … from space,” is a nebulous collective that does brisk business selling handmade and reconstructed clothes. Their pop-up store, Coven, materializes at 1008 S. Alamo every First Friday and at invite-only open houses. The collective’s members are unnamed and unphotographed by request, but here’s what we found out:

San Antonio is this desolate wasteland and we represent a few young people who are trying to raise something from the ashes. Most people are just so hypnotized by the mall and Forever 21. One day we want to open our own boutique here in San Antonio.

The collective is created of all different types of people, and we all pass the torch among ourselves to get things done. In the past our look was a lot crazier, more than just the colored hair. But people didn’t want to take a group of rough-looking kids seriously.

A lot of the stuff we sell just comes from our friends, who will bring over bags of old clothes and just let us rework them. We like everything that is occult and dark. Even though it would be really easy to set up an Etsy or Ebay store, we don’t. At our prices, our stuff would sell really quickly. But we want the local kids in San Antonio to have it, not just anyone who can afford to buy it online.